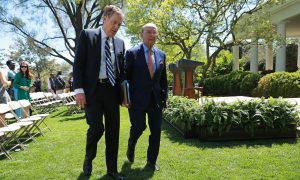 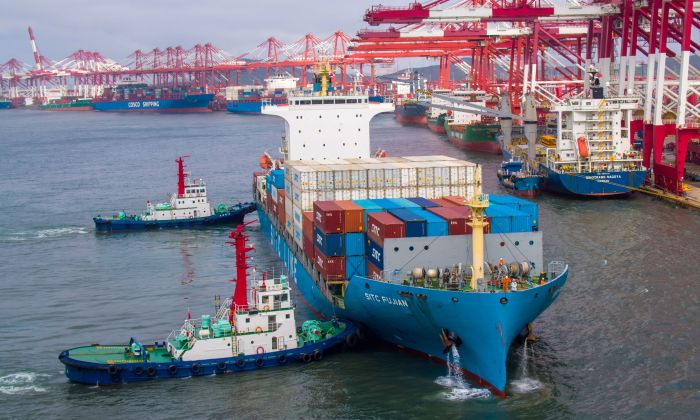 A container ship berthing at the port in Qingdao, in China's eastern Shandong province on May 17, 2019. (STR/AFP/Getty Images)
China Business & Economy

China’s had more trade barriers affecting the EU than any other country last year, according to a report by the European Commission published on June 17.

The Commission’s Trade and Investment Barriers Report (pdf) said newly launched tariffs by China in 2018 affected 25.7 billion euros ($28.8 billion) of EU exports—representing half of the total impact of new barriers.

In total, 23 non-EU countries had put in place 45 new trade barriers in 2018, bringing the total number to a record high of 425 measures in 59 different countries, the report said.

China and Russia had the most “problematic” trade measures overall, with 37 and 34 respectively, the report said.

Last year, China was “responsible for the most important barriers”, the report said, erecting four new barriers. This was followed by the United States, Algeria, and India.

“These obstacles affected EU exports worth billions of Euros—and cast a worrying shadow over the rules-based multilateral trading system,” Cecilia Malmström, EU commissioner for trade, wrote in the report. “This is as unacceptable as it is unjustified.”

The Commission singled out the Chinese regime’s new barrier in the information and communications technology (ICT) sector as having the most impact on EU exports—affecting 24.9 billion euros ($27.9 billion) of trade flows.

The report said the regime has introduced has been introducing various trade-restricting measures across its high-tech industries, in line with its overarching goals under an industrial policy known as Made in China 2025.

The policy seeks to transform the country into a high-tech manufacturing powerhouse by the year 2025, focusing on industries such as robotics, aerospace, and pharmaceuticals.

The report also highlighted the regime’s “unjustifiable cybersecurity and encryption regulations,” which have been implemented under the Cybersecurity Law which came into force in June 2017.

Among these is a strengthened set of cyber rules known as Cyber Multi-Level Protection Scheme that is due to come into force in December.

The report said these rules could lock out foreign companies from the market.

“The aim of these regulations is to classify all information systems by their level of security,” the report said.

“Based on the perceived level of sensitivity, foreign companies could be excluded from certain market segments.”

The draft version of the rules released last June, the report said, was also “problematic” in that it left certain key concepts undefined, thus leaving “considerable room for interpretation.”

The report also expressed concern that under these rules, companies would be forced to go through unnecessary testing and certification procedures to apply for certain IT systems.

Earlier in March, the Commision, in a report on EU-China relations, similarly criticized the world’s second largest economy for its protectionist policies.

In contrast with the EU’s open market policies, the March report said Beijing has set up a range of barriers hindering EU companies from accessing the Chinese market, including forcing European firms to transfer technology in exchange for access to the market, and subjecting food and agricultural exports to discriminatory and burdensome procedures.