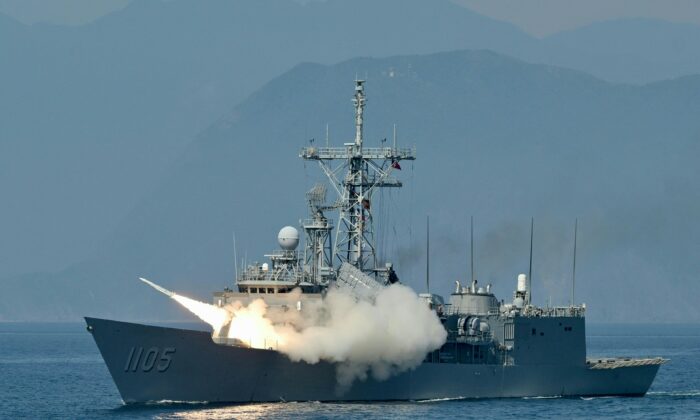 Taiwanese navy launches a U.S.-made Standard missile from a frigate during the annual Han Kuang Drill, on the sea near the Suao navy harbor in Yilan county, Taiwan on July 26, 2022. (Sam Yeh/AFP via Getty Images)
US-China Relations

China has warned the United States to cease its arms sales and military interactions with Taiwan after Washington agreed to sell anti-ship and air-to-air missiles worth billions of dollars to Taiwan.

Liu Pengyu, a spokesperson for the Chinese Embassy in Washington, warned that China will “resolutely take legitimate and necessary countermeasures” in light of the recent U.S. arms sales to Taiwan.

“The United States interferes in China’s internal affairs and undermines China’s sovereignty and security interests by selling arms to the Taiwan region,” Liu said in a thread on Twitter.

Liu said the arms sale “severely jeopardizes China-US relations and peace and stability across the Taiwan Strait,” and urged Washington to immediately revoke the plan.

China views Taiwan as a renegade province that must be reunited with the mainland. The Chinese regime began its largest military drills near Taiwan in August following U.S. House Speaker Nancy Pelosi’s visit to the island.

The U.S. Defense Security Cooperation Agency (DSCA) said Saturday that it had formally informed Congress about the possible arms sale, which totals just over $1.1 billion.

The three contracts also include related military equipment, parts, as well as technical and logistic support services. This marks the sixth arms sale approved under the Biden administration, according to the DSCA.

“We will not escalate conflicts or provoke disputes, but Taiwan will firmly demonstrate its determination and capability of self-defense to defend the nation’s sovereignty,” the office said in a statement.

Taiwan’s military shot down a drone that entered its airspace near one of its islands on Sept. 1. Taiwan Premier Su Tseng-chang said that Taiwan had repeatedly issued warnings to China over its incursions but they were ignored.

U.S. President Joe Biden has said that Washington will defend Taiwan if China attacks, but the U.S. policy on Taiwan remains unchanged.

“We agree with a ‘One China’ policy, we’ve signed onto it, and all the intended agreements made from there. But the idea that [Taiwan] can be taken by force … is just not appropriate,” Biden said during a May 23 press conference in Tokyo.

Washington does not support Taiwan’s independence and opposes any unilateral changes to the status quo from either side, but it would still provide Taiwan with the capabilities necessary to maintain its defense.

Two U.S. Navy warships—Ticonderoga-class guided-missile cruisers USS Antietam and USS Chancellorsville—sailed through the Taiwan Strait on Aug. 28, the first time since the Chinese regime ramped up military pressure on Taiwan.

U.S. allies such as Canada and the UK also sent vessels through the narrow waterway separating Taipei from Beijing.