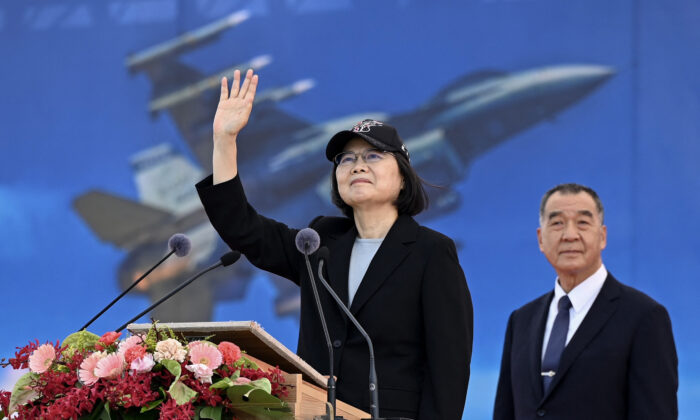 China Warns US After Washington Invites Taiwan to Democracy Summit

TAIPEI, Taiwan—The communist regime in China is angry that Taiwan will take part in a U.S.-led democracy summit alongside 109 other governments in December, after the Biden administration announced an invitation list on Nov. 23.

China is not invited to the summit, according to the U.S. State Department’s participation list. Burma (also known as Myanmar), Russia, and Vietnam are also not among the invitees.

In addition to Taiwan, Australia, Japan, Malaysia, Mongolia, South Korea, and the Philippines are among the governments in Asia that are invited to participate in the “Summit of Democracy,” to be held virtually on Dec. 9 and 10.

According to a White House statement, the summit seeks to “galvanize commitments and initiatives across three principal themes: defending against authoritarianism, fighting corruption, and promoting respect for human rights.”

Taiwan “can make meaningful commitments” toward the three objectives, a spokesperson for the State Department told The Epoch Times in an email.

“Taiwan’s experience in advancing a more transparent, responsive, and vibrant democracy serves as a powerful example,” the spokesperson said, adding that the island has been “a global leader in developing best practices for safeguarding against disinformation and foreign interference.”

The spokesperson said Taiwan’s inclusion in the summit is consistent with the United States’ “one-China” policy, guided by the Taiwan Relations Act and other diplomatic documents.

The United States has long held a “one-China policy,” which asserts that there is only one sovereign state with the name “China.” This is different from Beijing’s “one-China principle” under which the Chinese regime asserts sovereignty over Taiwan.

Washington and Taipei do not have formal diplomatic ties. However, the United States maintains a robust relationship with the island, and supplies military equipment to Taiwan for its self-defense under the Taiwan Relations Act.

In response to the invitation, Taiwanese President Tsai Ing-wen, in a tweet on Nov. 24, thanked Washington for “hosting this global conference to bring countries together in defence of our shared values.”

Xavier Chang, spokesperson for Taiwan’s Presidential Office, told local reporters on Wednesday that Hsiao and Tang will share with other governments on how Taiwan strengthens governance through technology and digital democracy initiatives.

Through this summit, Chang said that the two Taiwanese officials will share the island’s “democratic success story.”

The State Department spokesperson stated that Hsiao and Tang will “showcase Taiwan’s world-class expertise on issues of transparent governance, human rights, and countering disinformation” at the summit.

Zhao Lijun, spokesperson for China’s foreign ministry, accused the United States of putting up a platform for Taiwan’s “independence separatists” during a daily press briefing. He warned that anyone who “play[s] fire” with these “separatists” will “only burn themselves.”

The CCP sees Taiwan as a part of its territory that must be united with the mainland, by force if necessary. As a result, Beijing suppresses Taiwan citizens who support the island’s status as a de facto independent country, and calls them “separatists.”

Hours before Zhao’s remark, Zhu Fenglian, spokeswoman for China’s Taiwan Affairs Office, accused Washington of making “a mistake” for including Taiwan in the summit. Zhu said that Beijing “opposes any form of official interaction between the U.S. and the island.”

Some China experts have taken to Twitter to voice their approval of the Biden administration for not excluding Taiwan from the summit.

“This is a no-brainer. Taiwan is a vibrant, successful democracy. The question has always been not whether Taiwan would participate in the Summit for Democracy, but in what capacity,” wrote Bonnie Glaser, director of the Asia Program at the U.S. think tank German Marshall Fund.

Benedict Rogers, chief executive of UK-based advocacy group Hong Kong Watch, wrote, “It would have been a huge mistake not to invite #Taiwan, one of Asia’s most vibrant democracies, to the democracy summit.”

Chen Chien-fu, the head of the Graduate Institute of China Studies at Taiwan’s Tamkang University, told The Epoch Times via social media that Taiwan’s choice of representatives to the summit—Hsiao and Tang, instead of either Tsai or the island’s vice president—was a strategic move that was meant to avoid “provoking China.”

China’s hawkish state-run outlet Global Times, in an editorial published in August, warned that if Washington were to allow Tsai to participate in the democracy summit, Beijing would take “decisive counterattacks” and there would be “unprecedented storms” across the Taiwan Straits.

Global Times’ editor-in-chief, Hu Xijin, repeated such a warning on Twitter, hours after the State Department published the invitation list for the democracy summit.

​​In October, Taiwan’s defense minister warned that the Chinese regime would be capable of mounting a full-scale invasion of the self-ruled island by 2025.

This article has been updated with a statement from the State Department.