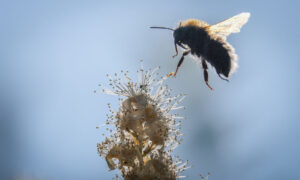 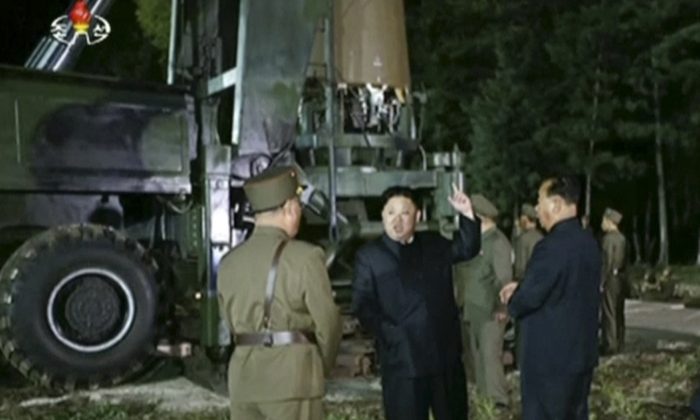 In this file image made from video by North Korea's KRT released on July 28, 2017, North Korean leader Kim Jung Un, second from right, gestures at the site of a missile test at an undisclosed location in North Korea. (KRT via AP Video, File)
International

China should remain neutral if North Korea launches an attack that threatens the United States, a Chinese state-run newspaper said on Friday, sounding a warning for Pyongyang over its plans to fire missiles near the U.S. Pacific territory of Guam.

The comments from the influential Global Times came after U.S. President Donald Trump stepped up his rhetoric against North Korea again on Thursday, saying his earlier threat to unleash “fire and fury” on Pyongyang if it launched an attack may not have been tough enough.

“This situation is beginning to develop into this generation’s Cuban Missile crisis moment,” ING’s chief Asia economist Robert Carnell said in a research note. “While the U.S. president insists on ramping up the war of words, there is a decreasing chance of any diplomatic solution.”

China, North Korea’s most important ally and trading partner, has reiterated calls for calm during the current crisis. Beijing has expressed frustration with both Pyongyang’s repeated nuclear and missile tests and with behavior from South Korea and the United States, such as military drills, that it sees as escalating tensions.

“China should also make clear that if North Korea launches missiles that threaten U.S. soil first and the U.S. retaliates, China will stay neutral,” the Global Times, which is widely read but does not represent government policy, said in an editorial.

“If the U.S. and South Korea carry out strikes and try to overthrow the North Korean regime and change the political pattern of the Korean Peninsula, China will prevent them from doing so,” it said.

Trump said North Korean leader Kim Jong Un was not going to get away with his “horrific” comments and disrespecting America.

“Let’s see what he does with Guam. He does something in Guam, it will be an event the likes of which nobody’s seen before, what will happen in North Korea,” Trump told reporters in New Jersey, without offering specifics.

Shortly after Trump spoke, U.S. Defense Secretary James Mattis told reporters the United States still preferred a diplomatic approach to the North Korean threat and that a war would be “catastrophic”.

Asked if the United States was ready if North Korea made a hostile act, he said: “We are ready.”

Tension in the region has risen since the reclusive North staged two nuclear bomb tests last year and launched two intercontinental ballistic missile tests in July in defiance of world powers. Trump has said he would not allow Pyongyang to develop a nuclear weapon capable of hitting the United States.

The threat from Pyongyang is prompting South Korea to beef up its military muscle amid fears of a clash along the world’s most militarized border, its frontier with the North. Seoul is looking at building more powerful missiles and a nuclear-powered submarine, officials said.

Experts said that, if North Korea did launch intermediate-range missiles toward Guam, all its other missiles and artillery would be ready for action. “We should be prepared too,” said Kim Dong-yub, a military expert at Kyungnam University’s Institute of Far Eastern Studies in Seoul.

Japan is also building up missile defenses and is considering the acquisition of munitions that would allow it to strike at North Korean missile sites.

On Thursday, U.S. and Japanese troops began an 18-day live fire exercise on the northern Japanese island of Hokkaido, which was to include rocket artillery drills and involve 3,500 troops.

The Northern Viper drills are one of the scheduled exercises that Japan’s Self Defence Forces conducts regularly with their U.S. counterparts and are not a response to the latest tensions.

South Korean and U.S. troops are also gearing up for an annual joint drill from Aug. 21, called the Ulchi Freedom Guardian, in which up to 30,000 U.S. troops will take part.

South Korea’s national security adviser Chung Eui-yong and his U.S. counterpart H.R. McMaster spoke on the phone for 40 minutes early on Friday, a spokesman for the presidential Blue House in Seoul said.

The two discussed responses to North Korean provocations and the security situation on the Korean peninsula, he said.