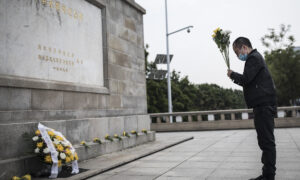 As many countries around the globe roll out vaccination plans for the CCP virus, the Chinese communist regime wants to put on another political show to take the lead. The regime’s major mouthpiece Global Times ran an editorial on Jan. 27, claiming that China will “strive to become the world’s number one in vaccination speed.” Chinese citizens revealed to The Epoch Times that mandatory vaccination is required for certain groups of people, and they believe mass vaccination is treated as a project to improve China’s image.