China Wants to Control the World’s Internet—Can It? 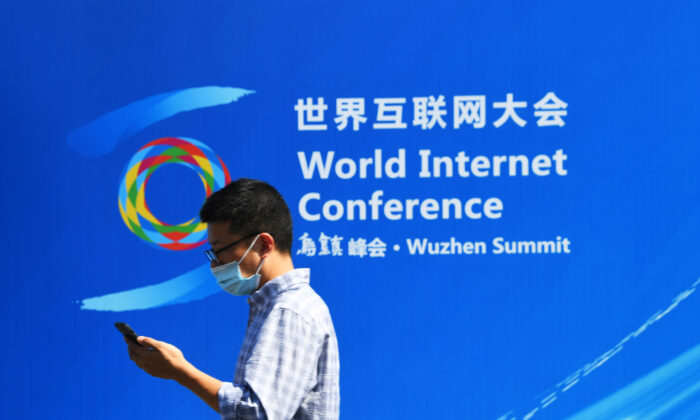 A man walks through the exhibition board of the World Internet Conference in Wuzhen, Zhejiang Province, China, on Sept. 26, 2021. (Lu Hongjie/Future Publishing via Getty Images)

The Chinese Communist Party (CCP) is actively attempting to control the internet. This might sound like hyperbolic fearmongering—but it isn’t.

Each year, the Cyber Administration of China hosts the World Internet Conference. In the words of Xi Jinping, the conference was designed to focus on “global internet development and governance.” This year’s conference took place last month.

Politico’s Phelim Kine recently wrote the Chinese leader desperately “wants an internet that aligns with the ruling Chinese Communist Party’s concept of cyber sovereignty.” Xi and his colleagues prioritize “absolute government control of online activity—complete with censorship and surveillance—at the expense of privacy and freedom of expression.” This should surprise no one in particular. After all, this is communist China we are talking about.

Having lived in the country, and having experienced the manner in which Beijing rules, I speak from experience when I say the following: In China, citizens are monitored very closely; people’s online activities—their every purchase, comment, and online search—are thoroughly examined. Now, Xi wants to create a world in which every government scrutinizes its citizens in a similar manner, hence the creation of the World Internet Conference.

This conference is no ordinary event. It has been attended by a number of renowned foreign CEOs, including Intel’s Pat Gelsinger and Tesla’s Elon Musk. At the most recent conference, we’re told, representatives of at least 18 countries and regions were in attendance. These included delegates from the likes of Afghanistan, Cambodia, North Korea, and Syria—four countries synonymous with the word “authoritarianism.” Moreover, according to a CCP statement, this year’s conference was attended by dozens of “world-renowned internet leaders, authoritative industry bodies, internet Hall of Fame inductees and others.”

Justin Sherman, a fellow at the Atlantic Council’s Cyber Statecraft Initiative, told Kine that the CCP wants to completely do away with the multi-stakeholder approach to internet governance. Instead, the CCP would much rather create a system that allows governments to exercise complete control over the way in which the internet is governed. While, technically speaking, China can’t actually control the internet, it can spread its questionable philosophies through coercion and big promises. The more countries and influential tech gurus subscribe to the Chinese model, the more the internet will start to resemble the internet in China.

If you happen to be an individual reading this in, say, the United States, there’s nothing to worry about, right? Wrong. People needn’t be living in China to have their profile monitored, their online movements tracked, and their comments censored.

This brings us to Google, by far the most popular search engine in existence. There are now 4.4 billion internet users; 4 billion of these now use Google. In the United States, a country of 329 million people, at least 246 million use Google. Of course, other search engines exist—Mozilla, Firefox, Brave, DuckDuckGo, etc.—but they simply can’t compete with Google’s sheer power and pull. This is problematic on many levels.

Investigative journalist Alan MacLeod recently noted that Google is now filled to the rafters with ex-CIA agents. In recent years, the Silicon Valley colossus has hired a number of professionals from the intelligence agency. Why? In short, “to work in highly politically sensitive fields.” These recruits, noted MacLeod, directly influence how we, the users, view the world “on its screens and in its search results.”

Google is a company with a history of spying on users and knowingly misleading the public. This is a company that uses “cookies”—no, not the delicious, diabetes-inducing type; the other inedible, highly-invasive ones—to track users’ online activity. These small blocks of data are used to identify your computer. Even when your location is turned off, Google can still track you.

In March 2021, Google promised to put an end to the use of invasive “cookies.” More than a year later, however, that promise remains completely unfulfilled. Chances are, it won’t ever be fulfilled. Google recently postponed plans to stop the use of “cookies” until at least the second half of 2024, according to authors at Reclaim the Net. Google, we’re assured, is actively trying to find a “privacy-friendly” way of tracking its users—a comforting thought for absolutely no one, I imagine. Remember, this is a company that removed the “Don’t Be Evil” clause from its code of conduct.

This brings us back to China’s push to control the internet. In truth, when it comes to our internet overlords, no good options exist. Whether it’s Beijing or a Big Tech giant such as Google, spying and manipulation are par for the course. Is Google as bad as the CCP? No, of course not. However, it’s not exactly a shining example of impartiality and decency, is it?