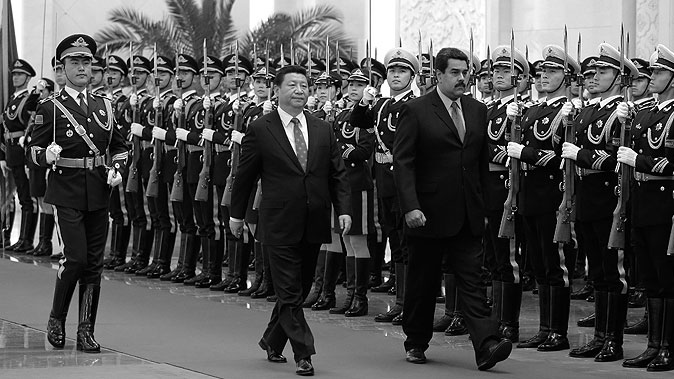 Venezuela's President Nicolas Maduro (R) walks with Chinese President Xi Jinping (L) as they review an honor guard during a welcoming ceremony at the Great Hall of the People on Jan. 7, 2015, in Beijing, China. (Andy Wong/Getty Images)
Americas

When you are dealing with China everything is big, especially numbers. Now China announced another big number, a $250 billion investment program for South America.

The problem with numbers is that, on the one hand, they hide a lot of things and on the other hand jump to conclusions which simply aren’t true after close examination.

So yes, $250 billion is a relatively big number, but the investment mostly in the form of loans and money for infrastructure is spread out over 10 years. All of a sudden, we are down to $25 billion per year for a whole continent with a 2013 GDP of $5.7 trillion including the Caribbean.

China knows it needs to diversify its huge pile of Treasuries and is taking every opportunity.

Seen from the other side, the $25 billion is a meager 0.6 percent of China’s total foreign exchange reserves, probably not even accounting for the interest it receives on its $1 trillion plus holding of Treasurys. China knows it needs to diversify this huge pile and is taking every opportunity.

Last but not least, comparing this amount to other countries, the United States invested $22.6 billion in South America in foreign direct investment alone, which does not include official loans.

There is no question the official sector of the socialist failed states of South America needs fresh dollar cash.

After crashing their economies by nationalizing and over-regulating productive industries, countries like Venezuela and Ecuador are looking forward to receiving loans of $20 billion and $7.5 billion, respectively. Loans to buy stuff from Europe, the U.S., and China.

Their inefficient economies were being kept afloat by high raw-material prices, which have now crashed—ironically, mainly due to slowing demand from China.

So, while investment from the U.S. private sector is receding, China’s official sector is taking its place: it wants to gain influence and secure cheap natural resources (mostly oil) for a time when its economy starts to accelerate again.

By buying the socialist states of South America (especially Venezuela), China is betting against the market which says the country has a 90 percent chance of a default within the next year. It is taking over South America risk the West is passing up, not too dissimilar to soviet satellite states during the cold war.

So with every investment you make, you have to consider the return. Nobody in their right mind would loan money to these countries at this moment which are on the brink of bankruptcy and have a track record of spurning private and public investors alike.

Maybe China thinks, because it is rich and powerful, the countries won’t dare to pull a funny one? It might have a point because there is already a high degree of dependency on China in South America, be it for dollars, imports, or technology transfer.

However, little countries are not afraid of fighting China, which on the other hand has a track record of burning money in risky overseas investments.