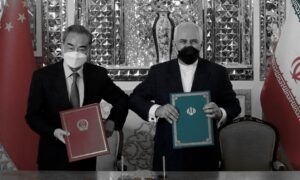 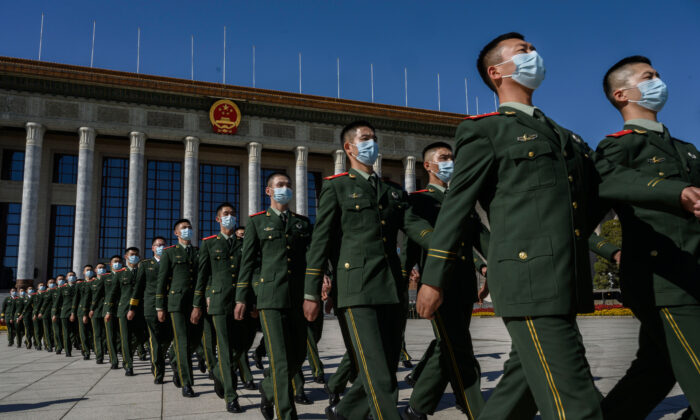 Chinese soldiers from the People's Liberation Army wear protective masks as they march after a ceremony marking the 70th anniversary of China's entry into the Korean War, at the Great Hall of the People in Beijing, on Oct. 23, 2020. (Kevin Frayer/Getty Images)
Thinking About China

China Wants It All

Will the rest of the world soon become Beijing’s plaything?

The future of China is much greater than the digital dictatorship-driven, dystopian prison camp of a nation that the Chinese Communist Party (CCP) has laid so heavily upon their people over the past couple of decades.

The CCP has so much more in mind.

After all, why enslave just one-fifth of the world when you can have all of it under your boot heel?

That’s a question that the CCP leadership must be asking themselves every morning.

There are many facets necessary to becoming a global superpower, and Beijing wants the whole enchilada. Not least of which is the CCP’s plan to establish global hegemony via a global currency system based on the yuan. This would replace the U.S. dollar, of course.

That’s just the beginning. China seeks absolute control of the world’s seas by controlling access to the world’s key trade routes. It also seeks to dominate the world through its “Made in China” policy, which is planned leadership in artificial intelligence, robotics, bioengineering, and all other technologies that currently are led by the United States, the European Union, and Japan.

These big plans, of course, come at the expense of everyone else, including Europe, the United States, and yes, even Russia. President Vladimir Putin may not yet acknowledge that, but he certainly knows it’s true.

Adding insult to deep injury, Beijing even wants to lead the vaccine effort for the entire world against the disease that they are accused of launching against the entire world. And they’re gaining influence–soft power—among the nearly 70 nations that are receiving the vaccine at no charge, despite the despicable way in which masks, ventilators, and other supplies and drugs were kept from most of the world as the pandemic spread.

China’s “vaccine-driven” foreign policy has also proven advantageous to their failing Belt and Road Initiative (BRI, also known as One Belt, One Road). While Beijing’s aggressive debt-trap scheme tempted nations into participating in the BRI, the word was out about the scam. But the CCP virus pandemic gave Beijing the opportunity to turn that around. China has linked vaccine access to BRI participation, giving the CCP new levels of influence and power.

Of course, it’s clear that China has undeniable, and apparently comprehensive, sway over entities such as the World Health Organization, the United Nations, and apparently, the Biden–Harris administration, as they like to call themselves.

A US That Won’t Lead

The bigger problem, however, isn’t the strides that China is making in the world, but the unwillingness of the Biden administration to lead in the world. President Joe Biden, and his evident mental deterioration, has enabled China and other adversaries to cast the United States as a declining power and to preempt the new administration from getting a positive start in its foreign policy.

They’re not wrong, either.

There is no leadership from the White House, only conciliation and weakness with regard to China and Iran, without any assertion of a U.S.-led world. In other words, China is filling the void on the world stage left by the departure of the Trump administration, a void that is only growing by the day under the Biden administration.

Not only is the U.S. influence rapidly waning abroad, but our economic capabilities at home are as well. Now that the United States is once again dependent on foreign oil— driving fuel prices, and other fuel-related prices, higher—inflation is now a real concern. Canceling the Keystone XL pipeline cost tens of thousands of jobs, and factories are once again leaving America for foreign shores, taking jobs with them.

What’s more, Biden’s excessive spending (nearly $2 trillion) under the ruse of COVID-19 relief, and a pending $3 trillion infrastructure plan, will only further undermine the economy and threaten our very viability by adding unsustainable debt service to our national budget even as productivity falls and unemployment rises.

In short, the United States is now on the same retrograde, post-empire path that it was on pre-Trump, resulting in a power vacuum in the world. Given these destructive trends, why wouldn’t the regime in China seek to remake the world in its own image?

As it stands now, certainly not the United States, nor Europe, for that matter. The Biden administration talks a good game but got its head handed to it by the Chinese at their recent summit meeting in Alaska. The world watched and saw a very different America than it did under former President Donald Trump. With Trump out of the White House and Biden in it, the United States is no longer the bulwark against an expansionist China.

What’s hardest to stomach is the fact that China’s rise at the expense of the United States was the plan in Beijing all along. The “China Card” that President Richard Nixon seemed to play so well against the Soviet Union at the height of the Cold War was really the “America Card” being played by China against us.

The utter deluge of technology, intellectual property, military hardware, and capital that flowed from the United States to China was calculated to make China more authoritarian, more powerful, and completely able to withstand the existential economic challenges it faced at home. The CCP, however, had no plans to moderate nor to make China more democratic. That false message was for American policymakers only.

Today, the CCP has shown its hand, and the United States, with its diminished leadership and economic profligacy, is unable, and in some cases unwilling, to push back.

What’s more, a Harris administration, which will likely be a fact in the near future, won’t make any difference. It may even expedite the transition of America into an economically hobbled nation at home and an also-ran abroad.

It’s going to be a long four years.