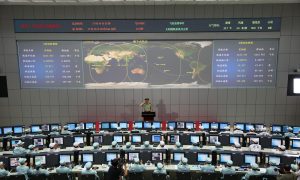 US Alert to China Space Threat
0 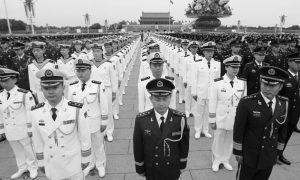 Chinese researchers are proposing a trillion-dollar solar space-based power station, which will beam its electricity to a collector on Earth using microwaves or lasers, the state-run Xinhua news agency reported on March 30. While billed as a power station, analysts believe this station is in fact meant to be a space weapon.

The proposed space power station, which Xinhua describes as “a super spacecraft on a geosynchronous orbit equipped with huge solar panels,” would be around twice the size of New York’s Central Park.

“If realized, it will surpass the scale of the Apollo project and the International Space Station, and be the largest-ever space project,” Xinhua states.

While the technology may sound a bit far-out, the Chinese regime activated and began funding the program in 2010, according to a report from the China Academy of Space Technology.

“Whoever obtains the technology first could occupy the future energy market. So it’s of great strategic significance,” said Wang Xiji, the principle spokesman for the project, and a researcher at the Chinese Academy of Sciences, according to Xinhua.

Wang had previously said, according to a report released by WikiLeaks, that the power plant could generate up to 100MW of electricity, with its size “dwarfing the International Space Station and becoming the biggest man-made object in space.”

A 2011 report from China’s Guangming Daily estimates the project will cost up to $1 trillion.

The station’s proposed laser and microwave systems have military capabilities that fit perfectly with the Chinese regime’s secretive Assassin’s Mace program, a set of strategies meant to allow China to defeat a technologically superior enemy, the United States.

Both microwave and laser technology can be used as anti-satellite weapons, or as weapons to jam electronics and missile defense systems.

A report released in September 2010 from the U.S. National Ground Intelligence Center warns of China’s Assassin’s Mace and “Trump Card” weapons. It states they include technology for jamming communications, using high-powered microwave weapons to disable missile systems, and other technology to destroy electronics in large areas.

You take this thing and turn it horizontally, then you could have a very powerful weapon
— Richard Fisher, defense analyst, Asian Military Affairs International Assessment and Strategy Center

The Chinese regime’s space-based solar power plant “is an idea that has been bouncing around over there for some time,” said Richard Fisher, senior fellow, Asian Military Affairs International Assessment and Strategy Center, in a phone interview.

“U.S. officials have told me that, yes, you take this thing and turn it horizontally, then you could have a very powerful weapon,” Fisher said, noting “any network of space solar systems that China may build will be done with the real potential for military benefits.”

“This is a very serious pursuit by China,” he said, noting that while the West has been mulling over similar concepts for decades, the Chinese regime is able to move enough funds to actually build such a system.

Fisher added that once completed, the program will very likely end up under the Chinese regime’s military, the People’s Liberation Army.

Discussions on the technology started with a 1968 article in the journal Science from U.S. scientist Peter Gleason, who proposed a design for a space-based solar power station.

The idea is that while solar panels on Earth get fluctuating sunlight each day, a space-based system would get almost constant sunlight. Xinhua reports the panels could gather up to 10 times more energy than those on Earth.

In 2010, the Chinese regime had “decided that power coming from outside of the earth, such as solar power and development of other space energy resources, is to be China’s future direction,” according to a report from the China Academy of Space Technology.

China does not currently have the technology needed for the program

It adds that space-based solar power and the development of solar-power satellites are among the “‘outside’ approaches currently under development in China.”

A design for a space-based solar power station was “activated, approved, and funded by the Ministry of Industry and Information Technology” in 2010, soon after researchers submitted a proposal to the Chinese regime, according to the report.

The program has a long development cycle. The report estimates that in 2020 testing a system in-orbit will begin, and in 2025 the first demonstration will be completed.

They estimate the system will be able to generate electricity by 2035, and will be commercially viable by 2050.

Among the biggest hurdles is the fact that China does not currently have the technology needed for the program. The Chinese regime will need thinner solar panels, and a launcher capable of carrying a payload of more than 100 tons into orbit.

In order for the station to function as a power station, the laser or microwave technology will need to be able to beam energy to Earth while losing less than half during transmission, a capability that doesn’t currently exist.