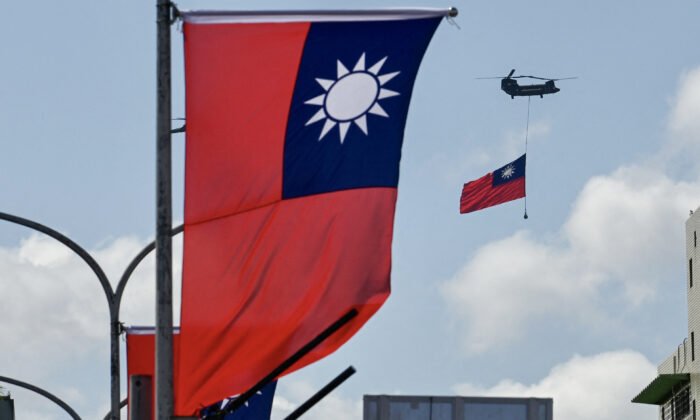 If one is to draw comparisons between the territorial ambitions of Russian President Vladimir Putin and Chinese leader Xi Jinping, it would seem that an invasion of Taiwan is imminent.

As Putin’s war against Ukraine drags on, China is leveling up on its decision on Taiwan, going as far as to mention the “Taiwan question” in the Chinese Communist Party’s (CCP) recently released annual government report.

What is the Taiwan question? It is a question of whether or not Taiwan is a sovereign country in China’s eyes, or merely a province.

At the moment, the CCP views Taiwan (officially known as the Republic of China) as a rogue territory that will eventually be unified with the People’s Republic of China, which is the official name for mainland China under communist rule. However, Taiwan considers itself as an independent nation and separate from the mainland.

There is a significant backstory here. In 1949, Taiwan’s leadership (the Kuomintang) retreated to Taiwan, losing mainland China to the CCP. Over the past seven decades, Taiwan has achieved unsurpassed economic growth and, in turn, has become a global market leader in many of the world’s most important industries.

Taiwan is also an important trade partner of the United States, and is a top 10 export market for U.S. goods. According to the Office of the U.S. Trade Representative, U.S. exports to Taiwan in 2020 included machinery ($5.7 billion), electrical machinery ($5.2 billion), mineral fuels ($3.3 billion), optical and medical instruments ($2.3 billion), and aircraft ($2 billion).

Mainland China’s GDP is much larger than that of Taiwan, but, as mentioned, Taiwan has some of the most sophisticated technology companies and component foundries in the world.

To quote the BBC, “much of the world’s everyday electronic equipment—from phones to laptops, watches and games consoles—is powered by computer chips made in Taiwan. By one measure, a single Taiwanese company—the Taiwan Semiconductor Manufacturing Company or TSMC—has over half of the world’s market.”

The recent events in Ukraine have ushered in a new urgency for smaller nations—especially those near larger belligerent countries—to be self-reliant. If the issues in Hong Kong serve as a barometer, Taiwan is facing a significant threat of invasion from the CCP.

In January, Taiwan’s parliament passed an additional $8 billion for defense and security funding to thwart security threats from China, but that is still likely not enough to stop an invasion from the CCP.

Recently, Anders Corr wrote in The Epoch Times: “The reality is that Taiwan is ill-prepared for war with China, having unwisely relied at least in part on the protection of the United States, even after 1979, when the United States all but canceled Taiwan’s sovereignty and the mutual defense treaty of 1955 to improve U.S. trade relations with China.”

Geostrategist and intellectual Brahma Chellaney reiterated in The Hill on March 7 that China has not faced any sanctions despite seizing Hong Kong, claiming territory in the South China Sea, expanding frontiers with the Belt and Road Initiative (BRI, also known as “One Belt, One Road”) infrastructure project, and committing genocide against the Uyghurs.

China, much like Russia, has not faced any repercussions for its actions over the past few decades, actions that have included buying political and economic influence in America and in Western economies. For the most part, the CCP has been allowed to run free with their communist and authoritarian agenda. This has empowered the CCP and increased its confidence that the United States will not react to an invasion.

Regardless, it is very likely that the issue will be forced if a GOP administration is back in office. During a visit in Taipei on March 4, former Secretary of State Mike Pompeo called on the United States to “immediately take necessary and long overdue steps to do the right and obvious thing: that is to offer the Republic of China, Taiwan, America’s diplomatic recognition as a free and sovereign country.”

Washington needs to end its China-Taiwan diplomatic ambiguity and to recognize Taiwan as a sovereign country before a full-scale invasion is launched by the CCP. It is time the United States pressured Beijing on the Taiwan question and to allow the self-ruled island to remain a democratic country with a free market economy.