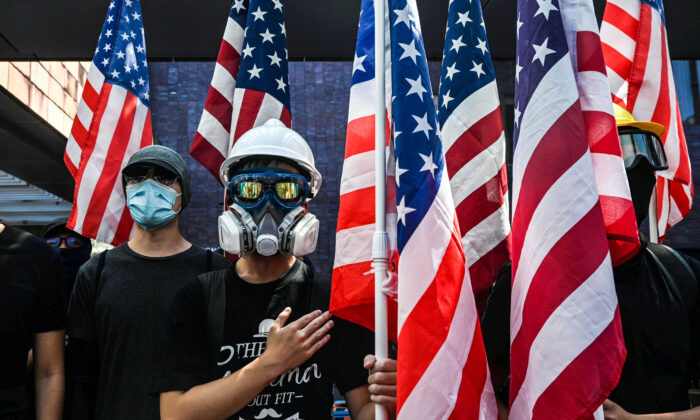 Students hold the US flag and sing the Star-Spangled Banner at Hong Kong University in Hong Kong on September 20, 2019, as they rally for the US Congress to pass the Hong Kong Human Rights and Democracy Act. (Anthony Wallace/ via AFP Getty Images)
International

Unfavorable views of China are shared among the majority of 19 countries surveyed by the Pew Research Center. Human rights issues are the top reason for the negative view of the Communist regime.

The respondents identified concerns about four issues relating to China: China’s policies on human rights, China’s military power, economic competition with China, and China’s involvement in the politics in their country.

Among 19 nations, the United States, Japan, South Korea, Australia, and Sweden have the worst views of China, more than 80 percent of respondents in each country holds a very unfavorable opinion of China.

China’s policies on human rights top the public’s concern and are tied to the unfavorable view of the country. A median of 79 percent of respondents across the nations say those policies are a “serious” problem, and 47 percent say they are a “very serious” problem.

The countries where bilateral relations are deteriorating tend to suspect China’s involvement in their domestic politics. This view is particularly shared in places like South Korea, Australia, the United States, and Japan.

In nearly all places surveyed, for those who see China’s human rights policies as a very serious problem, the public favor promoting human rights regardless of economic consequences.

A February Pew survey showed similar results among the American respondents: 70 percent, both Republican and Democrat, say the United States should try to promote human rights in China, even if it harms economic relations between the two countries.

When asked the first things that come to mind about China, “one-in-five Americans mentioned human rights, including 3 percent who specifically mentioned the Xinjiang region and the Uyghurs who live there, genocide, or concentration camps,” the Pew research reported.

Wang Xiang contributed to this report.