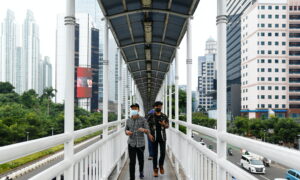 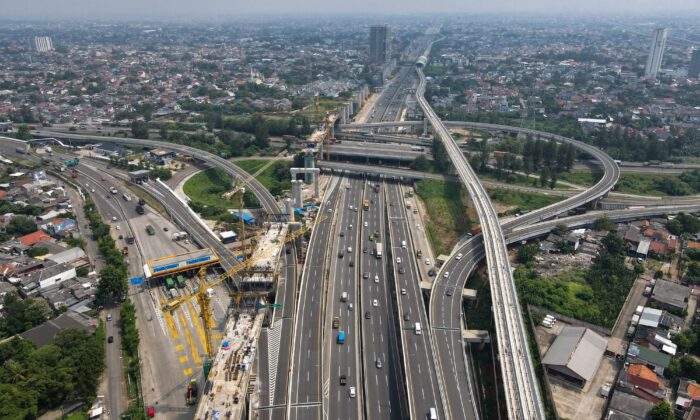 This aerial picture shows motorists commuting on a highway in Bekasi, West Java, Indonesia, on May 21, 2021. (Bay Ismoyo/AFP via Getty Images)
Thinking About China

China Versus the US: A Proxy Battle in the Indo-Pacific

Proxy warfare is best described as a game of geopolitical chess. The game is evolving in nature, according to Candace Rondeaux, researcher at the Center on the Future of War, and David Sterman, senior policy analyst at New America.

They define modern proxy warfare “as sponsorship of conventional or irregular forces that lie outside the constitutional order of states.”

Take the Middle East and its periphery, where “multiple states have adopted limited war strategies predicated on murky command structures that allow sponsors and proxies to cross red lines and bend international legal norms.” The Iran–Israel proxy conflict is the most obvious example, with both countries using the likes of Syria and Lebanon as battlegrounds in their never-ending conflict.

In Asia, China and India have used Nepal to engage in strategic arm wrestling. India, somewhat surprisingly, appears to be winning.

Struggling to counter India, the Chinese regime has instead set its sights on Indonesia, the world’s largest island country. The Southeast Asian nation has another suitor, however: the United States. Are Xi Jinping and President Joe Biden ready to engage in some arm wrestling of their own? There’s every reason to believe so.

With a population of 276 million people and growing, Indonesia is by far the largest market in Southeast Asia. Although the world’s fourth most populous nation is currently struggling to contain COVID-19, its economy remains strong. In fact, this year, Indonesia, the 10th-largest economy in the world, is expected to see its highest growth rate in more than 25 years. A country once synonymous with poverty, Indonesia “has made enormous gains in poverty reduction,” according to the latest World Bank report. In 1999, more than half of the country lived in poverty; today, that number is well below 10 percent. The country also boasts a young population. The United States and China, on the other hand, are struggling with the effects of rapidly aging populations.

In the past four decades, China’s population median age has risen by 91 percent. It now stands at 38.4 years. The United States’ median age is 38.1 years. Indonesia boasts a median age of just 29.7 years.

The positives don’t end there. As The World Bank notes, since 2005, Indonesia has “witnessed its middle class grow from 7 percent to 20 percent of the population, with 52 million Indonesians currently belonging to this group.” With a more affluent citizenry, Indonesia is now ready to enter the geopolitical heavyweight division.

The Jewel in the Indo-Pacific Crown

Benjamin Brimelow, in a piece for Insider.com, discusses mounting tensions in the Indo-Pacific, “where China’s economic growth and military modernization have drawn the attention and concern of politicians and defense officials in the region and around the world.”

Now, with China and the United States competing “for influence in the region,” they’ve set their sights on Indonesia, “a country that has historically resisted getting involved in foreign affairs,” according to Brimelow.

As Brimelow highlighted, Indonesia is home to more than 17,000 islands “that straddle the Pacific and Indian oceans,” thus offering the country “a commanding position over the vital Strait of Malacca and the traditional maritime approaches to Australia.”

In this game of geopolitical chess, Indonesia could prove to be the king, especially with fewer countries willing to take sides in the escalating conflict between China and the United States.

In a recent piece for Foreign Policy, Bruce W. Jentleson, a professor of public policy and political science at Duke University, discussed this very fact.

“When polled on what Japan’s position should be in a U.S.–China conflict,” he wrote, “58 percent of the Japanese public favored working for international cooperation rather than taking a side, with only 20 percent prioritizing relations with the U.S.”

It must be noted that only 1 percent of those polled “prioritized relations with China.” Jentleson also referenced the 34th summit of the Association of Southeast Asian Nations, which took place in 2019. When it came to taking sides in the U.S.–China conflict, the summit’s message was clear: Don’t make us choose.

Jentleson also warned that not even “the G-7 nor NATO nor the EU would go as far as the Biden administration wanted” in countering the rising threat from China. Countries such as Saudi Arabia and the United Arab Emirates, “all major recipients of American military aid,” also have agreements with China. Israel, a staunch ally of the United States, also signed a deal with “the Shanghai International Port Group to run the Haifa port.” The deal was struck despite pleas from the United States.

With fewer countries willing to choose a side, pay close attention to developments in Indonesia, one of the fastest-growing economies in the world. If the United States can win over Indonesia, it may prove to be a fatal blow to the Chinese regime. Roll up your sleeves, President Biden, and prepare yourself for the mother of all arm wrestles. Indonesia, the jewel in the Indo-Pacific crown, is worth fighting for.