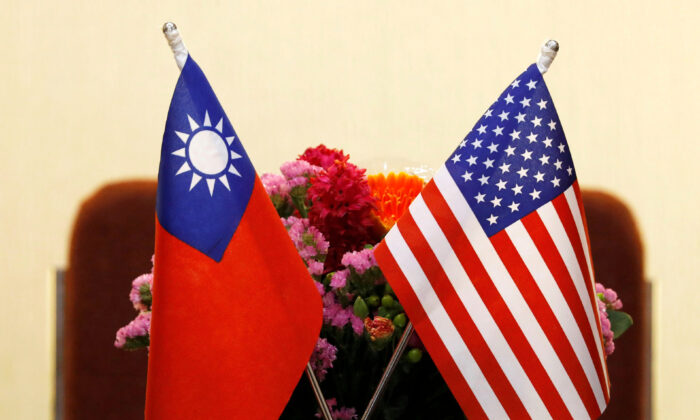 Flags of Taiwan and the United States are placed for a meeting between U.S. House Foreign Affairs Committee Chairman Ed Royce and Su Chia-chyuan, President of the Legislative Yuan in Taipei, Taiwan, on March 27, 2018. (Tyrone Siu/Reuters)
Taiwan

Taiwan’s four referendum results were released on Dec. 18. The majority voted no to all four issues including the ban of the imports of additive-fed pork from the United States, which was considered to possibly affect Taiwan–U.S. relations.

Taiwanese organizations and experts called out the Chinese Communist Party (CCP) for trying to manipulate public opinion in Taiwan by spreading disinformation about the U.S. pork import issue prior to the referendums.

The IORG (Information Operations Research Group), a Taiwanese non-governmental organization that studies the Chinese communist regime’s information manipulation and penetration in Taiwan, pointed out that the regime’s official media has been disseminating disinformation such as “the United States has continuously gained benefits from Taiwan by selling contaminated pork and weapons” since April 10.

Since May, Taiwan has experienced a local COVID-19 epidemic. The IORG said that the CCP’s disinformation campaign used the lack of vaccines in Taiwan at that time to claim “even if Taiwan bought pork and weapons from the U.S., they could still not get COVID-19 vaccines from the U.S.” According to the IORG, after the United States announced on June 6 that it would donate 750,000 vaccine doses to Taiwan, the CCP changed its narrative again to try to manipulate Taiwan’s referendum by stating “because Taiwan has purchased additive-fed pork and weapons from the U.S., it has got American vaccines.”

The IORG pointed out that the CCP has spread false narratives about the pork on Taiwanese media and social media, without scientific evidence in a fear-based disinformation campaign. Such false narratives include “Taiwanese pork has been found to have exceeded the standard of ractopamine in Hong Kong,” “Taiwanese pig products are sold in Hong Kong, and additive-fed pork are also sold in Taiwan,” “Taiwan’s military troops have consumed U.S. pork containing ractopamine residue,” “160 countries prohibit the import of U.S. pork containing ractopamine residue,” “the ruling party imports additive-fed pork, selling out people’s health,” “Chinese official media cited netizens’ remarks, comparing additive-fed pork to poison” and so on.

“The CCP is most concerned about Taiwan’s import of the U.S. pork containing ractopamine residue, and it uses it to stir up the anti-American sentiment,” the IORG said.

The IORG explained that the import of U.S. pork issue is directly related to Taiwan–U.S. relations. Therefore, the CCP has been motivated to try to influence public opinion in Taiwan to resent the United States. The food safety issue is highly sensitive in Taiwanese society. The CCP can spread the public’s distrust of the government by publicizing the “health risks” of U.S. pork.

Before the voting of the four referendums, the IORG issued reports for three consecutive weeks to analyze the Chinese regime’s disinformation and interference of the referendum in Taiwan based on scientific data. The latest report issued on Dec. 16 pointed out that the most important disinformation on the eve of the referendum included: “160 countries ban the import of the U.S. pork containing ractopamine residue” and “Taiwan pork products were found to exceed the standard of ractopamine in Hong Kong.” Even after it had been repeatedly clarified in the referendum opinion conference and news reports, the CCP’s disinformation has been widely spread in the LINE (social media app popular in Taiwan) groups recently.

“The additive-fed U.S. pork was originally a political issue,” he said. “It was merely manipulated into a food safety issue. There is no scientific basis or logical argument at all, and only causes damage in the island of Taiwan.”

He Mei-hsiang, a researcher at the Institute of Biomedical Sciences of the Academia Sinica and a Taiwanese epidemic prevention expert, said “ractopamine residue was only found in about 20 percent of the 240 samples, and they contained less than 5/1 billion (5ppb), which is far below the international standard of 10ppb.” She added that the U.S. government has a continuous monitoring mechanism for meat products that are to be delivered to the market, and there will be no ractopamine exceeding the standard. According to the information of the Council of Agriculture, so far, no meat containing the ractopamine residue that exceeds the standard has been detected in the tested American meat samples.

Taiwan’s President Tsai Ing-wen said on Dec. 18 that the results of the referendum conveyed the message that the people of Taiwan hope to go global and actively participate in the world.

Zhong Yuan contributed to the report.