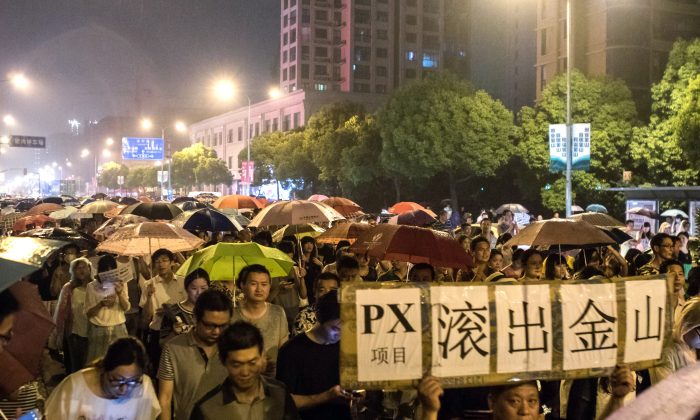 Demonstrators hold banners with slogans to protest against a paraxylene (PX) project in Jinshan district in Shanghai on June 23, 2015. (Vicente Miña/AFP/Getty Images)
China

In response to a protest movement in Shanghai that is deeply infused with contemporary sentiment, police in China’s largest city have resorted to a 1950s communist thought control technique: extracting self-criticisms and confessions of wrongdoing from participants.

Among those targeted are the many residents—over 10,000, by some estimates—from the Jinshan district in Shanghai, who held rallies and protests outside the district government offices last week.

They were responding to rumors that a petrochemical company was planning to move a paraxylene plant to their neighborhood, which would produce toxic chemicals used in the production of plastics and fibers. Shanghai authorities claim the rumors are false, but cynicism with official pronouncements is by now entrenched.

Worried that their children will be harmed by the chemical fumes, which can cause eye, nose, and throat irritation, the residents took to the streets to demand the plans be scrapped.

Over the weekend in response, Shanghai police mobilized hundreds of police to herd the protesters onto buses, then taking them to a nearby middle school, where they were made to sign the statements.

“If the arrested protesters didn’t sign a ‘guarantee paper,’ they weren’t allowed to go home,” said Mrs. Wang, a resident of Jinshan District, to New Tang Dynasty Television, an independent Chinese broadcaster based in New York.

According to the “guarantee paper,” which a Jinshan resident shared on China’s Twitter-like service Sina Weibo, the signees had to “deeply understand” their fault in joining the protests, never again “participate in activities relating to this chemical plant project,” and “abide by the law, obey the government, and not join rallies.”

Arrested protesters had to write down their names, identification numbers, home addresses, and telephone numbers on the document.

Chinese intellectuals were the first victims of the “guarantee paper” after the Communist regime seized power. Mao Zedong encouraged the country’s intelligentsia to point out the Party’s flaws in a Hundred Flowers Movement, then labelled them as “rightists” in 1957 and ordered them purged. Many prominent writers and scholars were made to give public confessions of their “wrong” understandings, a move designed to ruin and discredit them.

The regime’s public security forces regularly force confessions from those they consider to have caused offense, including political dissidents, prisoners of conscience, and journalists. The statements—or, sometimes, video confessions—are usually meant to demonstrate the repentance of the sinner, and the rectitude of the Communist Party.

In April this year, a 5-year-old and an elderly woman over 60 were killed during the police’s violent suppression of a protest against the environmental pollution caused by a chemical industrial park in Naiman Banner, Inner Mongolia. Local villagers were forced to sign “guarantee papers” promising not to leak “state secrets”—essentially referring to any information about the incident—to overseas media or organizations, according to Radio Free Asia (RFA).

Last June, police in Cao County, Shandong Province arrested 22 Christians during a family church activity, accusing them of being an “anti-Party cult,” RFA reports. They all had to sign “guarantee papers” before being released; those who refused were violently abused, and several young children under 3 years of age were denied food for over 24 hours.

Another heavy target of the forced confession are practitioners of Falun Gong, a spiritual practice, which has been persecuted since 1999. Those that refuse to sign such statements admitting their wrongdoing and renouncing their faith are often sent to labor camps, or ideological re-education classes. Torture is also used to extract the confessions, and estimates by human rights groups put the number killed in that process in the thousands.