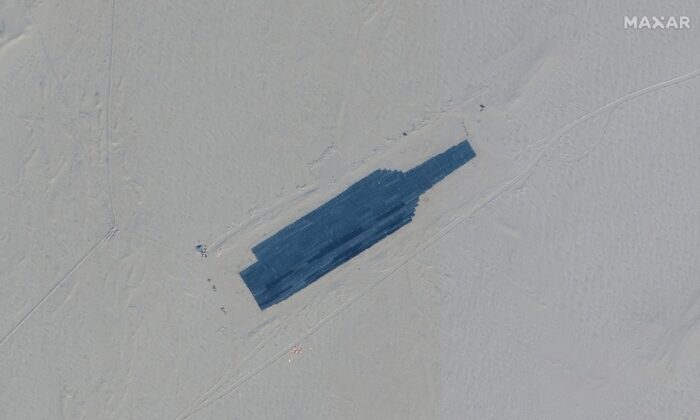 New satellite images have revealed mock-ups of U.S. naval vessels in a desert in western China. The structures, designed to look like a U.S. aircraft carrier and destroyers, are likely intended to be used as targets in military training.

The images were captured by Maxar Technologies, a Colorado-based imaging company. They were taken via satellite over the Ruoqiang area of the Taklamakan Desert, an obscure region in China’s Xinjiang Province.

A statement by the U.S. Naval Institute (USNI) said the location at which the targets were photographed was previously used for missile testing, including tests of China’s so-called carrier-killer missile, the DF-21D, in 2013.

“This new range shows that China continues to focus on anti-carrier capabilities, with an emphasis on U.S. Navy warships,” USNI stated.

Iran has also used mock U.S. vessels in the past, including an incident in which it exploded a mock U.S. aircraft carrier during military drills in the Strait of Hormuz. But the USNI stated that China’s testing facility was more complex.

The new images document a rail system at the testing site, suggesting that some of the mock ships are to be used as moving targets for Chinese missiles.

The Chinese regime has increasingly focused its military development on anti-carrier capabilities such as medium-range anti-ship missiles and hypersonics. This is in part because of the type of naval capabilities fielded by the United States.

China maintains the largest navy in the world, with around 355 vessels compared to the U.S. tally of 297. However, the United States has 20 aircraft carriers, whereas China has only two. As such, China is investing heavily in anti-carrier capabilities.

According to a new Pentagon report on China’s military power, Beijing is specifically investing in capabilities “designed to hold adversary aircraft carriers at risk when located within 1,500 km [930 miles] of China’s coast.”

The report also outlined that China was expected to grow its navy to 420 ships by 2025 and 460 ships by 2030. Much of that growth will be in major surface combat vessels capable of fielding advanced anti-ship cruise missiles, according to the report.

Likewise, the most recent annual Index of U.S. Military Strength, published by the Heritage Foundation in October, highlighted the growing disparity between the U.S. and Chinese navies. That report scored the U.S. Navy’s overall capacity as “weak,” and both its capability and readiness as “marginal,” trending toward weak.

One reason for this was that the United States overestimated the ability to leverage its aircraft carriers, according to Dakota Wood, a senior fellow at the Washington-based Heritage Foundation.

“Oftentimes you’ll hear comparisons that the U.S. Navy has as many carriers as the next [so many] countries combined, but only a percentage of that naval capability is available on any one day, and you have to take that and project that abroad,” Wood said at a launch event for the Index.

“I am very concerned about our failure to build a bigger navy,” Gallagher said. “I think you’re seeing a less favorable balance of power by the day.”

The new images come at a time when the Chinese regime is ratcheting up its campaign of military harassment toward Taiwan, sending a record 149 aircraft into the island’s air defense zone over a four-day period in early October.

Chinese leadership has vowed to unite the self-governed island with the mainland, by force if necessary. Taiwan President Tsai Ing-wen said the island would do “whatever it takes” to maintain its democratic way of life.

U.S. President Joe Biden said in October that the United States had a “commitment” to defend Taiwan in the event of an invasion, contradicting a long-held U.S. policy toward the island. However, his administration later walked back the comments.