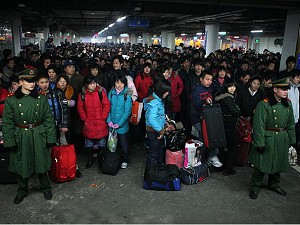 Passengers stranded due to heavy snow queue to board trains in the underground garage converted to a temporary waiting area, at the Shanghai Railway Station. (China Photos/Getty Images)
China

By A survey of articles from and about China

The Beijing-Guanzhou railroad, the backbone of China's railroad system, ground to a halt during the worst snowfall in half a century.

Millions of migrate workers were stranded in train stations at Guangzhou and other cities were left in chaos.

The government warned that the system would not be in order for the next few days and asked travelers to spend the Chinese New Year where they were.

According to the Railroad Ministry, the number of stranded passengers exceeded .5 million in Guangdong Province alone.

The statistics reported by the Hong Kong media indicated the number approached one million in Guangzhou and Shenzhen alone.

The authorities in Guangdong announced that all of the stations in this province would stop selling tickets—the business windows would only handle ticket refunds, as they expect the crisis won't end until Chinese New Years Eve (Feb 6). This triggered a lot of dissatisfaction among the travelers.

PLA Daily published an article on January 28 about its military technology advance.

The article says that Ge has succeeded in developing an automatic electronic interference apparatus for the next generation's fighter airplane.

He also finished a theoretical plan, operation procedure, and feasibility report to develop a “fighter plane air-refueling technology.” The article is posted on Xinhuanet's military section.

On October 22, 2008, Wang Zhaojun, a delegate member of the Political-Consultative Committee of Anhui Province wrote an open letter and published it on overseas Chinese websites. In it he asked China's top leaders, Hu Jintao and Wen Jiabao, to stop the political persecution of the Chinese people and start political reform.

Today, he wrote a second open letter to Hu-Wen calling again for political reform after his press conference about opening an environment protection website was blocked.

China and Japan's officials of quality inspection and commerce had a closed-door meeting on February 5 in Beijing to discuss the Japanese food poisoning incident by pesticide-tainted dumplings imported from China. Both sides expressed to closely cooperate in the investigation.

They will go to the food processing company in Hebei together for further investigation.

A survey of articles from and about China
Follow