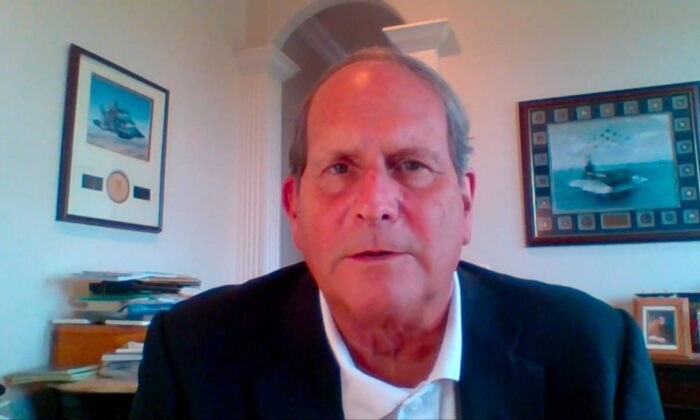 James Robb, former TOPGUN commander, retired Navy admiral, and president of the National Training and Simulation Association, in a screenshot in June 2022. (Screenshot via The Epoch Times)
Taiwan

If the United States opposes a Chinese invasion of Taiwan Beijing, will be unlikely to take the island because the Chinese economy will not withstand the potential sanctions and possible separation from the global economy, said James Robb, former TOPGUN commander and retired Navy admiral.

“For China to cut itself off from the United States economy would be really almost like setting himself on fire,” Robb said on EpochTV’s “Crossroads” program.

China needs the U.S. economy, the global economy, and global trade to grow, and this hedges against a possible Chinese invasion of Taiwan, he explained.

Robb thinks the Chinese side tries to determine whether the United States will support Taiwan in the eventuality of a Chinese invasion, and calculate “what kind of pain they are willing to suffer to take over Taiwan.”

“If the United States said no, and seriously went over there and did things that they are trained and planned for, then, I think, that’s a deterrent to China.”

In the Gulf War of 1991—when the United States and international coalition forces attacked Iraq by air—“the real victory was that the enemy left the air,” the former TOPGUN commander said.

TOPGUN fighter pilots took part in combat but “there weren’t a lot of enemy airplanes shot down during the Gulf War,” Robb said. The enemy knew that “the Americans were going to swiftly come through there, they weren’t going to be able to hold up their own, and would die if they did not leave,” he said.

“It’s pretty clear evidence that they had a respect for us [knowing] that we were going to be the superior force.”

TOPGUN is the Navy’s elite fighter training program that has been synonymous with aviation excellence, according to the Department of Defense.

The Chinese Communist Party (CCP) has a long view, Robb said. The country has 5,000 years of history and its leaders want another 5,000 years, but they “would like to be the key influencer around the globe,” Robb pointed out.

To achieve this goal, the Chinese leadership needs to ensure that it is able to control its people, which means that it should be able to feed them and sustain its economy so people will not stage a revolution, the commander said, calling it a defensive side of the Chinese plans.

On the offensive side, the CCP will advance slowly in small steps such as taking some islands on the south side, exerting its influence on the South China Sea, Panama Canal areas, Cuban oil, and South American nations, Robb explained, describing the Chinese tactics as “very quiet in many ways but … very effective.”

The Chinese influence has also reached the United States and it can be seen in the American economy and social media, Robb said. Walmart and Costco are flooded with cheap Chinese goods, and Americans like good deals, he added.

“They slowly buy companies, and then they steal the technology. They’re inside much more than you think.”

“[The Chinese] think the Americans fall asleep to that, and they don’t pay attention. It’s a slow but serious effort to just take over,” Robb warned.

If Americans do not believe it and will not prepare to counter it they can only react, Robb said.

Americans tend to believe that certain military options are not feasible, he added. “However, we have a lot of evidence over time of people doing things that were just not feasible. For example, airplanes [that crashed] into [World Trade Center] towers was not feasible in the mindset of the United States’ people before it happened.”

America is not prepared to fight a total war against another country because the cooperation across governmental agencies does not work well, Robb said. “Total war is the ability to bring all elements of power together” so to prepare for it a country has to take a total government approach, he explained.

The Department of Defense executes well but when other elements of the government need to get involved in a war “they don’t train together, and they’re not really prepared to fight together,” said Robb, who is also the president of the National Training and Simulation Association.

“It’s sort of an innocence of America,” he said, that makes people believe that the United States can establish friendly relations with other countries and there is a way to negotiate with them.

“There’s certain factions, that we found over time, that they just hate us and their will and their desire is more focused on just barbarianism than it is [on] negotiations.”

Stealing Technology By the CCP

Reforming the Chinese trade and investment and introducing incentives led to a surge in foreign direct investment in China beginning in the early 1990s, according to a congressional research report from 2019 (pdf). Such foreign investment inflow has been “a major source of China’s productivity gains and rapid economic and trade growth,” the report states.

Economically, China afforded itself the opportunity to compete with the United States materially in the military world, Robb said. “They’ve also done extremely well at stealing our secrets.”

Americans spend years and billions of dollars to develop a product, but the Chinese steal the design and replicate it without incurring the research costs and spending time on design, he continued.

Robb said he flew in the 1980s a Chinese fighter jet, the F-7 (an export version of J-7), which was a knockoff of the Russian fighter aircraft MIG-21.

Many experts consider the Chinese fifth-generation stealth J-20 fighter jet to be a copy of the American F-35 stealth fighter in terms of both stealth and conventional capabilities—with blueprints and other technology probably obtained illegally from U.S. firms such as Honeywell, wrote Stu Cvrk, a retired U.S. Navy captain.

China should have been officially moved from its third world country status to the first world probably in the mid-2000s, Robb said. “[It is] now that pacing threat from a technology point of view with our military.”

China’s status as a developing country at the World Trade Organization (WTO) was reaffirmed in June by Chinese Minister of Commerce Wang Wentao in a WTO statement (pdf).