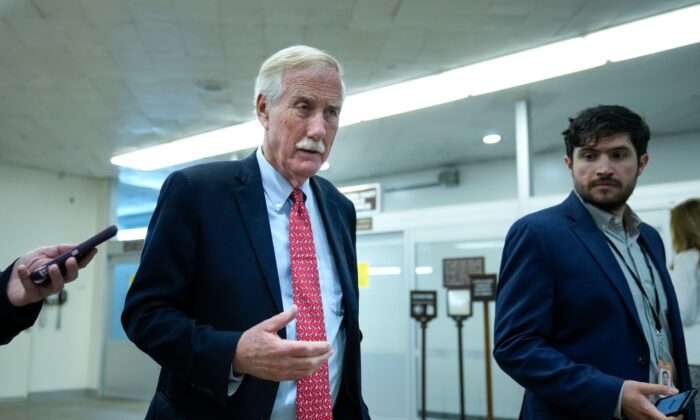 Sen. Angus King (I-Maine) talks with reporters as he walks through the Senate subway on his way to a vote at the Capitol in Washington on June 21, 2021. (Drew Angerer/Getty Images)
US-China Relations

The Chinese Communist Party (CCP) is rapidly pursuing nuclear armament across the board and seems reluctant to enter into any sort of arms control agreement such as the one the United States previously maintained with the Soviet Union, according to Sen. Angus King (I-Maine).

The comments came as part of a keynote address on the issue of nuclear nonproliferation at a virtual conference held by Washington-based think tank Center for Strategic and International Studies on Sep. 21, during which he expressed concern for the current state of nonproliferation efforts and voiced concern about China’s refusal to slow or halt its own process of nuclear armament.

King further stated that the CCP was likely attempting to reach full parity with the United States in terms of its number of nuclear weapons and their capabilities.

“That makes this a dangerous situation,” he said.

King said that the United States still relies on a broad strategy of deterrence, whereby the threat of force is intended to prevent the use of force by an adversary.

“The whole idea of deterrence is to have the capability to respond to any kind of attack or aggression against this country in order to deter that attack from ever happening.”

Despite the previous success of this strategy, however, King suggested that not enough had been done to adequately distinguish the many differences between Russia and China, and to account for the fact that the CCP is a fundamentally different kind of threat than what the USSR was during the Cold War.

“We’re at a fundamentally different place than we were 40 to 50 years ago,” King said.

“The rules of the game that were played with the Soviet Union and then Russia, don’t really apply to China,” he added.

King, who wrote his senior college thesis on the strategy of deterrence in 1966, articulated that a key difference in the strategic landscape between the Cold War and the present was that the fact that the world is no longer a bipolar political landscape, locked in a struggle between two great powers. Rather, he said, the world is entering a multipolar world that presents more complexity and novel scenarios in terms of international strategy.

“Now, China is very much in the mix,” King said. “It’s now a tri-polar world, and China is deeply engaged in a nuclear buildup.”

To this end, King said that the most immediate external threat to the United States’ ability to meaningfully pursue deterrence was the possibility of a cyberattack intended to interfere with U.S. command and control, those capabilities concerned with overseeing and facilitating military operations.

To that end, King argued that the United States needs to develop better redundancies, that is, systems and processes that guarantee a military technology can effectively operate even if another, similar technology fails.

“It’s so critical to have redundancy on top of redundancy, because if the enemy believes they can compromise our command and control capabilities, the deterrence evaporates,” King said.

“Any conflict that is coming our way will start with a cyberattack, the purpose of which will be to blind our communications and compromise our command and control,” King added.

King further mused that a foreign government could likely hire some 8,000 hackers for the cost of a single fighter jet, and that the low barrier to entry for cyberwarfare essentially guarantees that the next war will begin in cyberspace.

As such, he said that any effort at nuclear deterrence would be predicated on the United States’ ability to seriously invest in the cybersecurity necessary to protect the nation’s nuclear arsenal and its ability to use it. He drove the point home by asking those in attendance to consider the worst-case scenario at the onset of a potential armed conflict.

“What if the whole grid goes down?” King said. “What if there’s no power to the White House?”

“If they can disable our entire carrier fleet in the Western Pacific, that changes the strategic calculus dramatically,” King added.