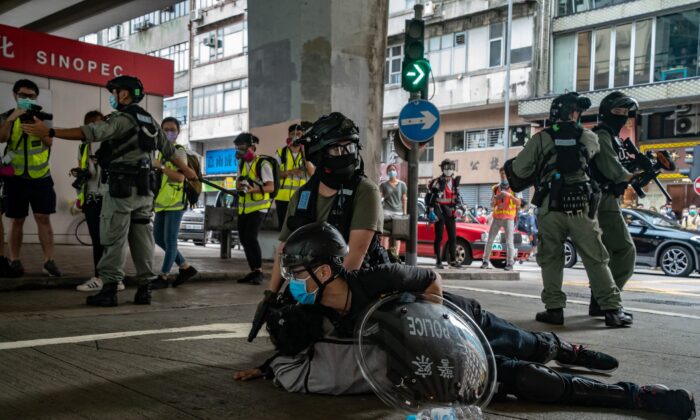 On July 2 China’s foreign ministry spokesperson, Zhao Lijian, warned Australia to not head down what he called the “wrong path” regarding the national security legislation.

The CCP is facing increased criticism internationally for imposing new laws that have severe punishments for what it considers acts of secession, subversion, terrorism, and the vague collusion with foreign forces.

Prime Minister Scott Morrison said on July 2 that Australia expected the CCP to uphold the basic law and safeguards that were established at Hong Kong’s handover to the communist regime.

“We do find these events very concerning, and we have been very clear about our statements to that in concert with many other nations,” said Morrison.

Speaking to Ben Knight on ABC Breakfast on July 3 Minister for Trade, Tourism, and Investment Simon Birmingham said the Australian government was preparing for any circumstance that may unfold in Hong Kong.

“We’re just working carefully through scenarios, in terms of what could occur, what we may need to respond to and they include scenarios around whether or not there may be individuals who need safe haven or circumstances, where they might seek to move their base or the locality,” said Birmingham.

On July 2 the Australian government flagged bringing forward similar opportunities as the UK announced the day before for residents of Hong Kong if they have a British National overseas passport (BN(o)).

Under the new changes, the UK will grant residency rights to BN(o) holders and create a path to full British citizenship.

The Risks of Doing Business in Hong Kong Cause Concern

Senator Birmingham asserted that there is a growing concern over the safety of Hong Kong because it is an essential centre of investment and a “commercial hub that has been so important to our region for so long.”

William Pesek from the Nikkei Asian Review noted on May 25 that the new security laws would likely take a toll economically on Hong Kong as companies weigh up the risk of doing business with the CCP.

Pesek explained that many companies now fear how “the spectre of the Chinese Communist Party” could remake both the Hong Kong judiciary and the banking system.

Furthermore, the new foreign collusion law frightens many as it does not specify where the boundaries lie for overseas businesses.

He notes could companies like Muddy Waters Research sustain their office in Hong Kong when part of their work is to put a spotlight on alleged fraud from mainland Chinese businesses.