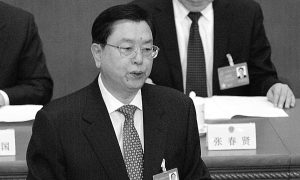 China Uncensored: What’s Happening in Hong Kong is Not What You Think…

Recently, China’s rubber stamp National People’s Congress (NPC) delivered the deathblow to hopes for full democracy in Hong Kong. Despite promising universal suffrage by 2017, the NPC ruled that nominees for Hong Kong’s chief executive must be preapproved by the Communist Party.

That’s like telling a flock of sheep they get to choose whether a wolf or a dingo watches over them.

But why now? On Aug. 19, the Wall Street Journal reported that, “according to people familiar with the matter,” the NPC would announce a decision at the end of August regarding Hong Kong’s right to vote. So the exact date of the decision wasn’t set that much beforehand. It’s easy to say the Chinese Communist Party (CCP) never planned to let Hong Kong vote without restrictions, but still, why was this announced now?

You can’t think of the Party as this single entity stopping at nothing to feed itself. The Party is actually badly divided between rival factions. Current Chinese leader Xi Jinping has his greatest political opponent in former Chinese leader Jiang Zemin and his faction. The hallmark of Xi’s quote-unquote presidency has been a quote-unquote anti-corruption campaign. It just so happens that most of the biggest players taken out by it have been a part of former Chinese leader Jiang Zemin’s faction.

For the past year, Xi has been taking out everyone close to Jiang Zemin. The biggest tiger to take the fall so far has been former head honcho of China’s domestic security network, Zhou Yongkang. Epoch Times has reported that Zhou had even tried to assassinate Xi Jinping. Zhou was placed under official investigation just last month.

So how is this connected to the NPC’s ruling on Hong Kong?

No one really knows what’s happening with Jiang Zemin right now. There are rumors he’s in detention, or is under house arrest, or in the hospital, or dead. But whatever may or may not be happening with Jiang, one thing is very clear: There’s a battle going on between Xi and Jiang, and Xi has the upper hand.

If I were in Jiang’s faction, I’d be worried. And desperate.

China is basically ruled by a scary council of seven old Chinese men known as the Politburo Standing Committee, and only three are still loyal to Jiang. They are Liu Yunshan, Zhang Gaoli, and Zhang Dejiang. Let’s forget about the other two and focus on Zhang Dejiang.

Zhang is the head of the NPC. So when the NPC rules against universal suffrage in Hong Kong, or releases a white paper saying Beijing can do whatever it wants there, that’s basically Zhang Dejiang saying that.

So let’s connect the dots. One month after fellow Jiang faction member Zhou Yongkang is taken out, Zhang Dejiang does something that is guaranteed to inflame Hong Kong, right before the potentially massive Occupy Central protest.

Jiang’s faction wants trouble in Hong Kong. In fact, Zhang Dejiang was expecting it. According to Forbes, Zhang said Beijing expected “something might happen.”

And since people saw an envoy of 10 extra tanks rolling into Hong Kong right before the NPC announced they’d be taking away universal suffrage, I think its blood on the streets they want—another Tiananmen Square massacre.

Jiang Zemin got into power in the first place because of the massacre. If they can manufacture another one in Hong Kong, that would be a huge blow to Xi Jinping. Xi would become the face of whatever happens in Hong Kong. He would have to clean all that up, and that would make it harder for him to continue going after his political enemies.

And if Xi is destabilized enough, it could even be a chance for Jiang’s faction to regain power. Hong Kong is becoming a powder keg and this might have been an attempt to throw the match that would set it off. And if the people of Hong Kong aren’t careful, they could be playing right into the hands of some pretty bad guys.

This decision by the NPC, may not have come from Xi. I’m not saying Xi is a good guy. I just don’t think we’ve had a chance to see his true colors. He’s been holding his cards so close to his chest, they’re practically under his ribcage. After all, no one predicted that he was going to go all out against his enemies like this before he came to power. If they had, he would never have gotten power in the first place.

I’m also not saying don’t protest the decision by the NPC. But I think it would be better to specifically target the guys really behind the decision: Jiang Zemin’s faction. And when Zhang Dejiang is inevitably purged and someone new is the head of the NPC, maybe things might be different for Hong Kong.

Meanwhile, Xi is also trying to expand his influence over the military. The hawkish, warmongering extremist faction of the Party is going nuts, aggressively inflaming territorial disputes. The result is that they’ve managed to push even communist Vietnam so far, that there’s talk of allying with the United States against China. Think about that. Vietnam might ally with the United States against China!

Could it be Xi is letting this side of the Party overextend itself, so he can say, “You guys messed up big time.” Then Xi can easily take greater control of China’s military without having to do any of the kind of political purging he’s been doing with the domestic security forces. Xi is close to having the kind of power that no one has had in China since Deng Xiaoping or maybe even Mao. There’s already a growing personality cult around him.

And there’s potentially a fortune on the line. Jiang’s faction controlled China’s domestic security forces for almost a decade. In 2012 alone, the budget for China’s vast network of police, military police, and secret police was $124 billion, which is $10 billion more than the Army’s budget. If these guys were corrupt, which I think we can safely assume, a lot of that money was probably siphoned off and stashed away. That’s a lot of money to go around if Jiang’s faction falls.

So far in this power struggle, Xi Jinping has been winning left and right. But all that could unravel if Hong Kong turns into a warzone. So to anyone reading in Hong Kong—be careful! At the risk of sounding a little Lord of the Ringsy, there are sinister forces bent against you. But I don’t think you needed me to tell you that.