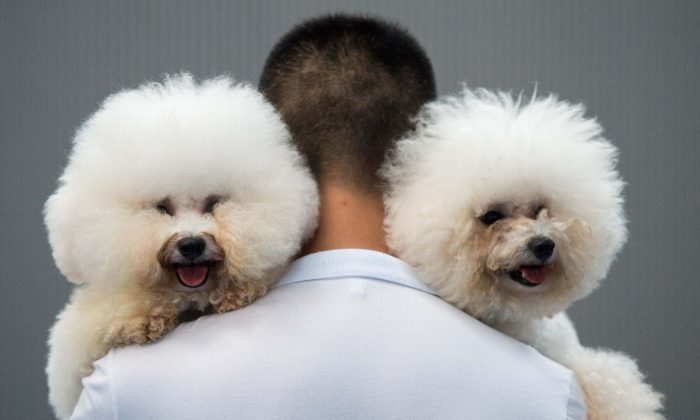 China Uncensored: The People’s Daily Is Run by Cats

With constant and shifting political intrigues swirling in the Chinese Communist Party, it’s hard to always know who is in charge. But one thing has become abundantly clear to me, and that is that cats have taken over China’s state-run People’s Daily newspaper.

You see, not all state-run media is created equal. The People’s Daily has always been under the direct control of top Party leadership. So people look at its official editorials as a statement of official policy.

It’s opinion articles, though …well, let’s hope not. Because a recent op-ed by the People’s Daily, takes aim at the gravest threat facing China.

Dogs! Obviously, dogs. What? In Mao’s day, dog ownership was considered elitist and perhaps you’d have your dog killed by roving red guards. But these days, because of insidious infiltration by the American empire, (and increasing economic disparity giving rise to classes who can afford dog food), dog ownership is on the rise. In 2012, there were 1 million registered dogs in Beijing alone.

Isn’t it obvious? Dogs, as the People’s Daily editorial said, damage “social peace and harmony,” because they, uh, poop, everywhere, like “landmines!” Truly, this is just a “crude and ludicrous imitation … of a Western lifestyle,” and Chinese people must “INVEST IN MORE CATNIP!”

You see, dog ownership means the West wins. First you own pets, then the next thing you know, people want to vote for their own leaders. I’m pretty sure that’s how it went down during the American Revolution.

The Party sees itself in an ideological battle with the Western world. You see the West—and I’m quoting a leaked Party memo called Document 9—wants to use notions of individual liberty and freedom of speech to “gouge an opening through which to infiltrate our ideology.”

What is this ideology? “Unification of thought.” Like a quantum singularity, or black hole of thought.

Owning dogs seems like a harmless pastime that enriches the lives of pet owners, but really, they might as well be walking on Confucius’s grave, with how anti-China they’re being.

Wait, is the Party for or against Confucius now? I can never keep track.

Of course the West has particularly victimized Hong Kong since it was once under British occupation and so has a lot of misguided notions about so-called animal rights. After a dog was accidentally killed by the Hong Kong Mass Transit Railway, many Hong Kongers were deeply moved.

But as an article in the state-run Global Times pointed out, “Is this really a sign of Hong Kong’s civilization? It’s difficult to answer the question.” That kind of “pup-ulism,” as the article calls it, might be fine in Hong Kong, but if it ever went to China, “it will cost our society dearly.”

Yeah, these Hong Kongers might think they’re so great because they care about some stupid dog; but you see, a society shouldn’t be judged by how animals are treated. No! “The level of a society’s civilization should be based on how it treats humans.”

Yes, Global Times, we should judge a society by how it treats people. By the way, how’s China doing with that?

Anyway, why would you want a dog? They’re dumb, mindless followers of their masters. Cats are independent, they do whatever they want, and don’t listen to anyone!