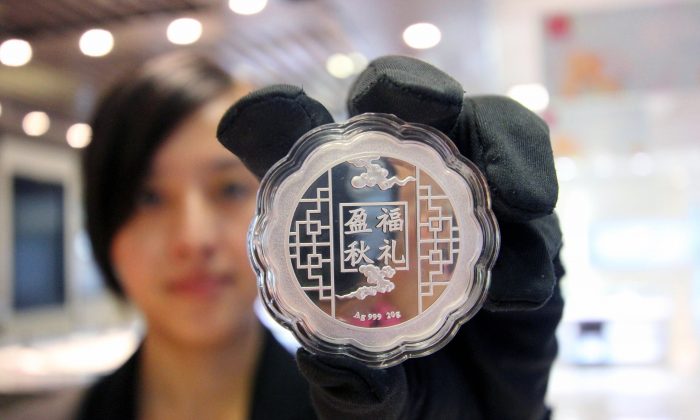 A silver “mooncake” in a shop in China’s Henan Province on Aug. 29, 2013. (STR/AFP/Getty Images)
China Uncensored

Monday was the Mid-Autumn Festival in China, also known as the moon festival. It’s a time for people to reunite with family and friends and celebrate the harvest, while they gaze up at that glowing orb in the sky and remember the goddess of the moon, who saved Earth by defeating the evil Queen Beryl of the Negaverse and restoring the glorious moon kingdom of the Silver Millennium.

Anyway, the details aren’t important. What this festival is really about, is the mooncakes! Yes, mooncakes, those little bricks of joy that become a hot commodity every fall.

If you’ve never had a mooncake, think of them as the fruitcakes of the East. With salted duck egg yolks. Everyone buys them and sends them as presents. But since traditional mooncakes, as the New York Times said, are the “size, and nearly the density, of a hockey puck,” most people don’t really want to eat them. Environmental group Green Power said that Hong Kong throws out more than 1.5 million mooncakes a year.

So companies have gotten creative. Starbucks makes espresso and caramel macchiato mooncakes. Mrs. Fields makes brownie mooncakes. Godiva makes mooncake chocolates. And the Holy Grail of this category, Häagen Dazs makes ice cream mooncakes that can go for more than $200 a box. One day I’ll finally get my hands on one of those.

And over the past few years, traditional mooncakes have also gotten a makeover. Crystal Jade “Premium Gold Treasure” mooncakes, are decorated with gold leaf, and only 88 dollars a box! What a steal!

Yes, the mooncake business was booming … until now. According to state-run China Daily, mooncake sales have fallen by 50 percent this year in Guangdong Province, China’s mooncake manufacturing hub. That could be literally a billion dollars of lost revenue.

What happened? Well, like Zhou Yongkang, mooncakes have fallen to the wrath of Xi Jinping’s anti-corruption campaign. You see, mooncakes became a way for people to give expensive gifts, and by gifts, I mean bribes. Like mooncakes stuffed with money. Or mooncake boxes that just happen to include luxury watches inside. How did those get in there?

And forget about gold leaf on mooncakes, we’re talking mooncakes made of solid gold. And jewels. That’s right, jewel-encrusted mooncakes.

While mooncake corruption sounds funny, the Communist Party treats it like a serious problem. In fact, last year the Central Discipline and Inspection Commission banned officials from buying mooncakes with public funds. And this year, head of the commission Wang Qishan even singled out “mooncake corruption” in a meeting of top communist leadership. Authorities have even set up a website so that people could report mooncake corruption.

Did the anti-mooncake drive work? Maybe a little too well. At least, in terms of getting people to stop buying mooncakes. The other day an editorial in the state-run People’s Daily criticized some Party officials for getting so paranoid that they stopped giving even regular mooncakes to lower-level employees, a usual holiday practice.

In terms of stopping corruption, it’s not so clear. According to some news articles, people have now moved to giving digital “red envelopes” of money online, or mooncake coupon books that can be redeemed or resold for cash value.

It seems that focusing specifically on mooncakes may have backfired a bit for the Party.