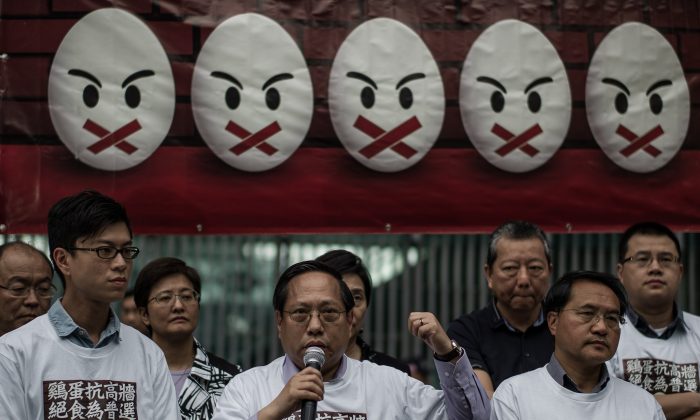 Protesters stand under a banner as they prepare to go on a hunger strike to call for “true” –––universal suffrage in Hong Kong on March 28, 2014. Around 15 pan-democrats, including five of the city’s lawmakers, took part in the hunger strike, a step-up action as fears that intervention by China could prevent genuine political reform increased. (Philippe Lopez/AFP/Getty Images)
Opinion

China Uncensored: Is Hong Kong the Next Tibet?

Well that might not be a bad thing, right? I mean, as I always hear from Chinese state-run media, since the Communist Party took over, Tibet has gone from a backward, feudalistic land ruled by the iron fist of the slave master lamas, to the prosperous land we know today. Why, of the four cities in China that have breathable air, one is Lhasa!

And of course, Tibet is beautiful! Before it was brutally conquered, sorry, I meant, “liberated,” it was cluttered up with monasteries—over 6,000! Thanks to the Chinese Communist regime, by 1976 that number was reduced to eight.

I know, some of you say I’m too critical of China and are probably assuming I’m going to make fun of them for not finishing off those other eight, but hey, you know, I’m not. I mean, they were so busy burning down things inside of mainland China back then, and there’s only 24 hours in a day, there’s a limit to how much you can destroy. Even for them.

And with all of the Han Chinese flooding into Tibet, authorities tried to help out by proposing a law that would replace the native Tibetan language with Mandarin in schools. That only caused minor massive protests. Don’t worry, though! Things didn’t get out of hand. Probably because of the snipers they have regularly patrolling rooftops.

So if the People’s Republic of China has been able to do so much in Tibet, just imagine what it could do in Hong Kong. And think about it. It took over Tibet in 1950. It has only been in charge of Hong Kong since 1997. Before that, Hong Kong was a barren wasteland. At least it was in the 1700s, I’m a little spotty on the history since.

But look at it now! Oh yes, there are some exciting developments happening in Hong Kong. Many of the tried and true practices it has implemented in Tibet are already being used in Hong Kong to spectacular success. For example, erasing the native language.

In Hong Kong, they speak Cantonese, which is also spoken in neighboring Guangdong Province in the mainland. Ever since the handover of Hong Kong back to Chinese rule in 1997, it has been pushing Mandarin in Hong Kong, especially in schools. State-run People’s Daily even suggests that Mandarin should be the only language used in public schools. And as great intellectuals like Peking University professor Kong Qingdong said, those Hong Kongers against such things are “bastards,” “thieves,” and “dogs.”

With the influx of business from the mainland, some even think that in the near future, Mandarin will be the official language in business, school, and of course, the government. And the push for Mandarin has been pretty successful. Half the population can now speak Mandarin. Ten years ago, only a third of Hong Kong could. Actually, last year, Mandarin overtook English as the second-most-spoken language. And because Mandarin is the official language of mainland China, most Westerners are learning that, and not Cantonese.

But there are some naysayers out there. Namely, about 85 percent of the population. According to a 2011 survey by Hong Kong University, only 16.6 percent of Hong Kong residents identified themselves first as Chinese citizens. The others consider themselves “Hong Kongers.” They also did a poll in which fewer than one in three people said they felt proud of Mandarin. Then there’s the 92 percent who responded to a poll by the South China Morning Post that said they’d rather be back under British rule.

But so then, who are these people identifying themselves as Chinese? Well, it could be all the mainland Chinese flooding Hong Kong. They buy up baby formula, infuriating Hong Kong mothers who now don’t have enough for their own children. Almost half of all births in Hong Kong since 2010 are to mainland mothers, because children born there get Hong Kong residency.

Housing prices have also skyrocketed by as much as 70 percent since 2009, according to research by Nomura, Japan’s largest consulting and IT firm. That’s because nearly one-fifth of the money made in real estate purchases was in purchases to people from mainland China, and now there’s a housing shortage.

Resentment in Hong Kong toward mainlanders is at an all-time high. In 2012, a full-page color ad was taken out in the popular Hong Kong newspaper the Apple Daily, with a giant menacing locust perched on the mountains overlooking the Hong Kong skyline. Guess whom the locust was supposed to represent?

So obviously, with such a serious issue, you’d think the Hong Kong government is keeping a close eye on just how many mainlanders are now calling themselves Hong Kongers. But it’s not.

But so it’s not just polls, housing prices, the job market, and language these mainland settlers are going to be able to influence. Currently, Hong Kong is ruled under the “one country, two systems policy.” Basically, Hong Kong is a part of China, but because Hong Kong was exposed to dangerous Western ideals like, freedom and democracy, it wasn’t ready for full assimilation with the motherland. But don’t worry! The CCP has been working hard to slowly erode all those pesky freedoms Hong Kongers have suffered under.

The official head of Hong Kong is Chief Executive Leung Chun-ying. The chief executive is elected by 1,200 business leaders and influential citizens. And guess what? Most of them have close ties to Beijing. But the dreaded day is fast approaching when Hong Kong will have universal suffrage, and hostile foreign forces will be able to vote against the best interests of the Party. Sorry, Hong Kong.

Chinese authorities have been trying to stop it, however. Originally they said the people of Hong Kong would get to decide when they’d have universal suffrage. The Hong Kong people wanted 2007–2008. Their government said 2012 at the latest. Fortunately the CCP was able to stem the tide and got the date pushed back to 2017.

But it can’t be pushed back anymore! A massive protest is being planned for later this year called Occupy Central, where potentially thousands will demand universal suffrage. Okay, no problem. Let the people vote. Because the Chinese regime has a secret weapon up its proverbial sleeve—flooding the region with its own people so that elections will turn out the way it wants.

So Hong Kongers want to vote. Sure, no problem. But before that happens, the Chinese regime will make sure there are as many mainland Chinese people and businesses in Hong Kong as possible, all with their personal interests tied to the mainland, so that when elections do happen, things will go their way.

And then of course there’s the question of whether or not people with critical views of China will even be allowed to run for office.

But can you really blame mainlanders for wanting to get out? Part of the reason so many were giving birth in Hong Kong is because it was their second child, and because of the one-child policy, mothers might otherwise have suffered a forced abortion. Maybe that will change now that there’s a two-child policy. Also, so much baby formula is being bought because the mainland variety has tended to be a bit deadly. Not to mention the total lack of freedom, rampant corruption, and the fact you can’t breathe the air or drink the water in even the capital of the country.

Hong Kong is where mainland Chinese can see demonstrations and protests against the government. That’s why the CCP is so afraid. Hong Kong can be a guiding light to the mainland, so before Hong Kong changes China, the Communist Party will do everything it can to change Hong Kong.