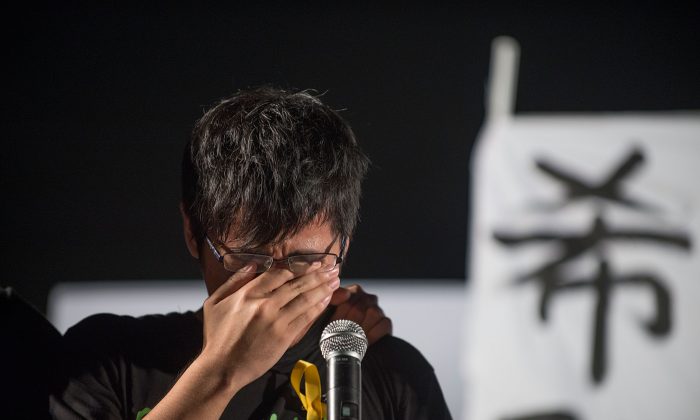 Hong Kong Federation of Students Chairperson Yong Kang Alex Chow cries as he gives a speech during the protest at Tamar Park outside of the Hong Kong Government Building on Aug. 31, 2014. (Anthony Kwan/Getty Images)
China Uncensored

Loyal readers will know that I’ve been keeping tabs on the slow-motion train wreck that’s happening in Hong Kong. For those of you new to China Uncensored, here’s the “Cliff Notes” version:

Hong Kong, which the British “won” during the Opium Wars, was returned to mainland China in 1997 under a “one country, two systems” rule that meant the city could keep its Western-style freedoms. However, it was not allowed to fully elect its own government officials, but the Communist Party promised, pinky-sweared, even, that Hong Kong would be able to have free elections by 2012. Or 2017. Whichever comes last.

The question is, what does “free elections” even mean? Who knows, right? That’s totally up to interpretation. The Hong Kong people think it means being able to nominate and vote on Hong Kong’s chief executive directly through a popular vote.

What the Communist Party means, however, was made clear on Sunday. That’s when the National People’s Congress (NPC), China’s rubber stamp legislature, issued a unanimous decision on how Hong Kong’s 2017 election should be run. All eligible Hong Kong voters will be able to directly vote for the chief executive … after the nominees are approved by a committee stacked with pro-Beijing loyalists. It means that whomever the Hong Kong people elect as their leader, the Communist Party will always be in charge.

After the decision was announced Sunday, thousands in Hong Kong gathered in protest. The leader of the Occupy Central movement, which had promised to occupy the financial center of Hong Kong if Beijing refused to allow full democracy, said that Hong Kong was entering “a new era of civil disobedience.” University and high school students from the group Scholarism promised to boycott classes starting mid-September.

On Monday, Li Fei, the head of the NPC, flew to Hong Kong to announce the decision, and was booed by protesters. A tense standoff resulted in police pepper-spraying some of the protesters outside the building.

What happens now? Well, in six months, the Hong Kong Legislative Council will have to vote on this plan. There are enough pan-democrat legislators though, to make sure that it won’t pass. But if it doesn’t pass, then Beijing said Hong Kong’s 2017 election will be the same as all its past elections. The chief executive will be picked directly by the nominating committee, and no one gets to vote.

The Party has chosen to confront Hong Kong activists directly. Some China analysts have said that this is a contrast to how Deng Xiaoping, China’s former leader, most famous for brutally smashing the 1989 Tiananmen student democracy protests, handled Hong Kong. When talks began between Chinese and British officials in the 1980s about returning Hong Kong to China, the British were understandably wary. So Deng reassured them with this “one country, two systems” idea. Don’t worry, Hong Kong will get to keep its freedoms. For at least 50 years. And we’ll throw in free elections, too.

So the argument is that Deng handled this with subtlety and compromise, unlike today’s Communist Party.

But what they’re missing is this: Deng Xiaoping and today’s Communist Part, they’ve been playing the same game the entire time, a game that’s taken 30 years to show the Hong Kong people just how badly they’ve been played.

“One country, two systems” was just a way for the Communist Party to get its foot in the door. Then it could slowly erode Hong Kong’s freedoms, until Hong Kong is completely controlled by the Party. Sure, it still looks like “one country, two systems,” but that doesn’t even matter, because the Party controls both of the systems. This is what Party leaders had in mind the entire time. They’re playing the long game.

Now, the people of Hong Kong aren’t taking this sitting down. Many are predicting increasing civil unrest in the next six months. But will the Party back down? It did once, in 2003, when half a million Hong Kongers marched against Article 23—a proposed amendment to Hong Kong’s Constitution that would enable the Communist Party to enact draconian security measures that were similar to those in mainland China. Measures like banning organizations banned in the mainland, or arresting people for inciting subversion. But that was 11 years ago, and the stakes are even higher this time around.