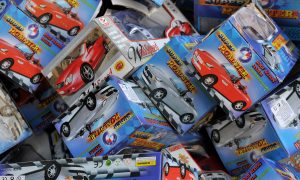 So there are some reasons why you might think the horrendous acts of torture committed by the CIA in the name of the War on Terror might be okay. But you have to admit, it does sound pretty bad.

The CIA did a terrible thing that the United States needs to face up to and make sure never happens again.

So from Beijing’s perspective, clearly, the moral of the story is … Chinese authorities should be allowed to torture as many people as they want.

Not that they torture people, mind you. China’s Foreign Ministry Spokesman Hong Lei said in response to the torture report: “China has consistently opposed torture. We believe that the US side should reflect on this, correct its ways and earnestly respect and follow the rules of related international conventions.”

That’s right. China. The bastion of human rights. Just ask Gao Zhisheng. Where is he again?

You might have missed that moral though, through the huge amount of schadenfreude in Chinese state-run media’s in-depth reporting on the CIA torture story.

For example, Communist Party mouthpiece Xinhua wrote an editorial condemning the United States for doing nothing about its own human rights problems. “People rarely hear the US talking about its own problems, preferring to be vocal on the issues it sees in other countries, including China,” the editorial said.

That’s right. Why isn’t the United States talking about it’s own problems. Except of course, when the U.S. Senate, investigates the country’s intelligence agency, and releases a fully unclassified report to the public detailing the terrible atrocities they committed.

But I’m not trying to say the United States is better than China or that the CIA is somehow justified for what it did. I’m saying torture is bad. Especially when the people being tortured, haven’t committed any crimes.

But the reason we now know all this about the CIA, is because people in the U.S. government spent six years investigating what happened. And now things can be done to stop it.

No one’s watching in China. There is no system of checks and balances that’s going to suddenly find the National People’s Congress asking the secret police, if they’ve been torturing political prisoners again.

So there needs to be people, and governments outside of China keeping an eye on things, which really, it seems like they haven’t since the Chinese regime still does basically whatever it wants, while U.S. companies keep tripping over each other to throw money at it.

Also, the CIA torturing people, while completely terrible, doesn’t mean I, or any other individual, no longer has a right to want to see a better China. Now if you’ll excuse me, I have a letter to write to Congress. Try doing that in China.