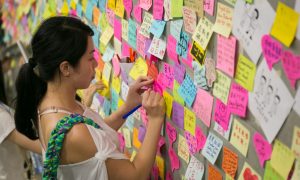 What Is Happening in Hong Kong? Umbrella Movement May Be Just the Beginning

Okay, I need to talk to the student protesters of Hong Kong for a moment. You guys just need to relax and take a deep breath. Not literally of course, there’s still some tear gas in the air.

The point is: Is democracy really worth fighting for? Or rather, completely nonviolently protesting for?

Last week, Hong Kong student groups began a class boycott to protest the Communist Party’s decision not to allow free elections for Hong Kong’s chief executive in 2017. Over the weekend, they started a sit-in in front of government headquarters.

And that’s when Occupy Central, the group that’s threatened to shut down Hong Kong’s Financial District to protest the growing influence of the CCP, started early. They joined the students on Sunday, instead of on Oct. 1, National Day, the day that marks the Communist Party’s conquest of China.

But what good will all this protesting do? In a press conference Sunday, current chief executive Leung Chun-ying (CY Leung) made it clear the Hong Kong government doesn’t actually have the power to ask the Communist Party to change any decision it makes on how Hong Kong holds elections. But they do have the power to send Hong Kong police en masse to attack unarmed protesters with tear gas, batons, and pepper spray. That was Sunday night.

But maybe it’s not so much that police are spraying tear gas as it is getting people ready for the air in Beijing! Because Hong Kong and mainland China are only going to get closer.

Now, believe it or not, the morning after all that went down, CY Leung actually said police showed the greatest possible restraint in dealing with the protesters. If that were the case, from what you can see of the footage from Sunday night, I’d really hate to see what it would look like if the police didn’t show restraint.

Of course since we’re apparently now living in bizarro world, you know what? There were no protests in Hong Kong over the weekend. They were just celebrating National Day. That is when they weren’t supporting the general election plan! At least that’s how Shanghai’s state-controlled Dragon TV reported on the protests, because instead of showing the Occupy Central protests, they showed a completely different protest—a pro-Beijing protest—instead.

State-run media have had different ways of coping with the protests. It took until Tuesday night for official broadcaster CCTV to run a story on the protests, which they denounced for disrupting transportation networks and harming rule of law.

But there is method to the madness. That tweet was so crazy that it did manage to distract Western media by shifting attention from the protests to pigeon butts.

The most interesting state-run media move though, was a short-lived opinion article in the extremely nationalistic Global Times. Written by a professor at the Shanghai Institute of Armed Police, it argues that if Hong Kong police couldn’t handle the protesters, the People’s Armed Police could legally move in from the mainland.

That article was quickly taken offline. The fact that it was published, but then deleted, could show that a certain faction within the Party would like to see a violent end to these protests, as I talked about in my last piece on Hong Kong.

But the real story now is about the birth of the Umbrella Revolution, as people are calling it after protesters used umbrellas to shield against pepper spray. Tens of thousands of Hongkongers are protesting in the streets. At their peak, the protests covered 2 miles. To give you an idea, 2 miles of protesters in New York would stretch from Central Park to the Flatiron District.

Some are wearing homemade gas masks with lab goggles and saran wrap to protect against possible tear gas attacks. So far, they haven’t needed it, as police have stood down since Sunday night.

Now could be a turning point for the protests in Hong Kong. The city has been pretty apolitical in the past, but with the police attacks Sunday night, more people are starting to sympathize with the protesters. One photographer even caught a police officer washing pepper spray out of a protester’s eyes. So if the protesters continue to be peaceful, and more people support them, this could go on for a while.

Needless to say, these protests are not good for the Communist Party. Censors have been working overtime to block news about the protests in mainland China. In fact, according to Weiboscope, Chinese censors were twice as active following the police crackdown on Sunday as they were for the 25-year anniversary of the Tiananmen Square massacre.

And that’s something so censored, many younger people in China don’t even know it happened. Now it’s unlikely at this point that these Hong Kong protests could spread into mainland China, but the Party isn’t taking any chances. They’ve now even blocked Instagram, which was one of the last major Western social media platforms that you could access in China.

But here’s one way that heavy-handed censorship has backfired on the Party. They don’t like foreign journalists mucking around in China. So they’ve made it harder and harder for them to get media visas. So what’s the result? Many extremely talented and experienced journalists, including ones kicked out of China, have set up shop in Hong Kong instead.

Of course, as I have mentioned, I believe the decision to deny Hong Kong universal suffrage was part of a larger battle between rival factions within the Chinese Communist Party. But how it all plays out is still unclear.

What’s next for Hong Kong? Protesters are still on the streets, and they’re calling for CY Leung to resign. The protests could get bigger. This is traditionally the time for lots of mainland Chinese tourists to take shopping trips to Hong Kong, which might get interesting.

In any event, it looks like there’s a storm coming to Hong Kong. So raise your umbrellas up high.
For more China Uncensored, please visit ChinaUncensored.org