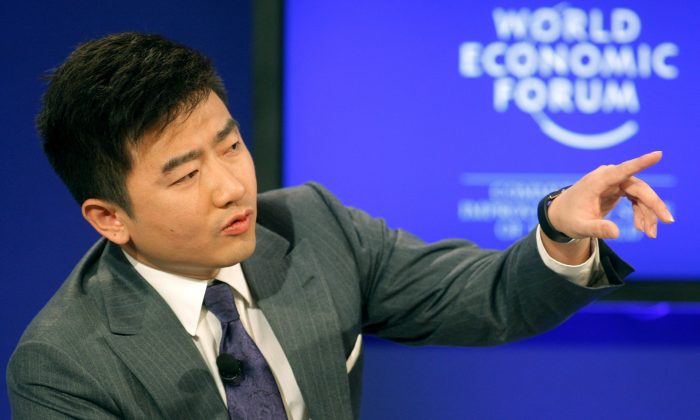 It’s amazing how closely linked the media, secret police, and corruption can be in China.

Rui Chenggang is the face of state-run CCTV’s financial news channel. He hosts its flagship show, “Economic News.” But he’s a celebrity in his own right, having shot to fame in 2007 after leading a successful campaign to get Starbucks kicked out of the Forbidden City. It is the Forbidden City, after all.

More than 10 million people watch his show each night, and he has more than 10 million followers on Weibo, making him the most popular state-run media personality on social media. His fans even call him “the face of the new China.”

And he also speaks fluent English, so he gets to conduct the big interviews with Western officials and CEOs, people like Bill Gates and Bill Clinton.

But Rui is also controversial. He’s known for being fiercely nationalistic, and he pulls stunts that make him look, well, like a huge flaming jerk. At a press conference in South Korea in 2010, President Obama tried to give the last question to a South Korean journalist, but Rui stood up and said, “I’m actually Chinese, but I think I get to represent the entire Asia,” and launched into his question.

A year later, at the World Economic Forum in Dalian, he said to then-U.S. ambassador to China Gary Locke that he had heard Locke flew economy class to the conference. Rui then asked whether that was a reminder that the United States owes China money. Oooooooo, buuurn. Locke replied that it was U.S. government policy for officials to fly economy. Stay classy, Gary Locke.

Well Rui sounds like an all around great guy, but, bad things happen to good people. Two weeks ago, Rui’s show broadcast in its normal timeslot, but Rui wasn’t there. His co-host, Xie Yingying, sat next to an empty chair.

Since the Chinese government banned propagating feudal superstitions on TV, I’m guessing there wasn’t supposed to be a ghost sitting there.

But news soon spread that prosecutors had detained Rui less than an hour before his show. The reason? Corruption. Gosh, there’s a lot of that going around these days.

Last month, Xi Jinping’s ongoing anti-corruption campaign caught Rui’s mentor at CCTV, Guo Zhenxi, who was the head of its financial news channel. Guo was rumored to have made more than $300 million from bribes. State-run media has said that Rui’s case is closely linked to Guo’s. And Rui has problems of his own, relating to a public relations company he founded called Pegasus. I guess they read Greek mythology in China, too.

Rumors are that Rui used his influential position as a news anchor to charge fees for praising companies or hush money for not investigating or criticizing companies. But this type of bribery is fairly common in media companies in China, and for many reporters, this would be business as usual.

So then why is Rui really being investigated? As with so many things that involve the Communist Party, the answer lies in Rui’s political connections. Rui’s mentor, Guo Zhenxi, has ties to Li Dongsheng.

Li was the former deputy minister of Public Security, which controls China’s fleet of police, military police, and secret police. He was also the former head of the Gestapo-like 610 Office, responsible for persecuting adherents of the banned Falun Gong spiritual practice. He was detained and removed from office last December.

Before going into public security, Li was a top official at CCTV. And only in China would a career in media lead to top-ranking “public security” positions.

Li was also a crony of Zhou Yongkang, the former security czar who’s been under investigation for months now. Apparently all corruption investigations lead back to Zhou.

And Rui also reportedly had close connections with several children of top leaders, such as the daughter of former Premier Li Peng, the daughter of former propaganda chief Li Changchun, the son of former totally-not-elected Vice President Zeng Qinghong, and most famous for us in the West, Bo Guagua, son of disgraced official Bo Xilai.

What’s notable about this list is that most of these officials either already are in trouble or very possibly will be soon. As Rui said in his two autobiographies, it’s important to have connections in China. It just looks like he picked the wrong team.