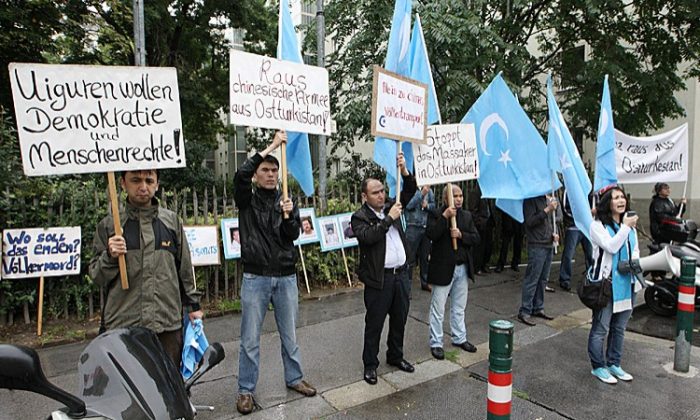 Some 20 activists demonstrate in front of the Chinese embassy in Vienna to protest against the repression of China's Uyghur minority in the northwestern region of Xinjiang on Aug. 1, 2011 in Vienna. (Dieter Nagl/AFP/Getty Images)
China

The Chinese mission to the United Nations attempted to smear a high level Uyghur representative before his address to a press conference on China’s poor human rights record, according to a rights group.

In the days leading up to China’s Universal Periodic Review (UPR) at the United Nations, the Chinese mission to the UN attempted to discredit Dolkun Isa, the Chairman of the World Uyghur Congress (WUC), by waging a smear campaign aimed at influencing foreign media, said the Unrepresented Nations and Peoples Organization (UNPO), a non-government organization.

In a letter released on Friday, the UNPO revealed that a member of overseas media sent the organization an email which explained how the Chinese mission in Geneva was circulating the false statements about Isa, spreading deceptive allegations that he was associated with terrorist activity.

Isa was scheduled to speak at a press conference in Geneva on Oct. 22, the day of China’s UPR, to address the Chinese Communist Party’s (CCP) continuing human rights violations of the Uyghur people.

UNPO stated that China’s smear campaign against Mr. Isa is to draw attention away from China’s record of dreadful treatment of the Uyghur minority, calling China’s efforts “baseless allegations against prominent Uyghur activists,” which are politically motivated.

“The World Uyghur Congress and Mr. Isa condemn violence,” said the UNPO statement, explaining that UNPO and WUC seek a peaceful resolution to the conflicts and “welcome an independent and international investigation into Chinese allegations of Uyghur terrorism.”

China is attempting to link Uyghur dissidents and groups to international terrorism, and defending suppression in the Uyghur region of Xinjiang (which they refer to as East Turkestan) to subversive forces of separatism, terrorism, and extremism, UNPO said.

Scholars are skeptical of China’s stance that it faces a terrorist threat, and have cast considerable doubt this position, UNPO said.

Isa, a well known advocate for the Uhygurs, fled China in 1997 and sought asylum in Europe, where he was later granted German citizenship. In 2012 he met with United States congressional representatives to discuss the treatment of Uyhgurs in China, though the PRC attempted to prevent the meetings.

China’s Xinjiang Province has been the site of periodic violent upheavals, as China tightens the controls on the residents and moves to develop the resource rich area. Eleven Uyghurs were killed in five separate raids between Sept. 25 and Oct. 11, said Radio Free Asia.