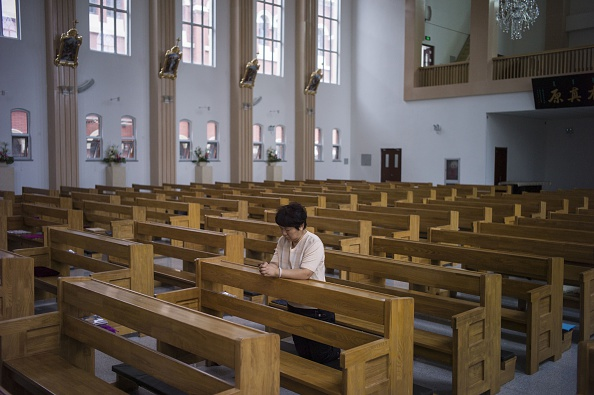 A woman prays at a Catholic church in Tianjin on June 7, 2015. Many churches in China’s province of Zhejiang have been turned into cultural centers. (Fred Dufour/AFP/Getty Images)
China

In recent years, the local authorities in the coastal Chinese province of Zhejiang have been taking down crosses from church buildings or even demolishing churches. Now, the Zhejiang authorities are replacing crosses with the Chinese Communist Party flag and transforming churches into buildings for Party activities.

“A few days ago a preacher came to our church and said that the government had converted some churches into halls or cultural centers,” a churchgoer from Rui’an City in Zhejiang told Radio Free Asia in June.

The churchgoer added: “We are worried, but prepared. Once our church is transformed, we will definitely retreat and abandon the church; we’ll create house churches and gatherings because that’s better.”

Guo Baosheng, a Chinese pastor in the United States, told RFA that the Chinese regime had followed a “strategic process” in transforming 2,000 churches into so-called cultural centers.

“These cultural centers have the same gathering time as churches—9 a.m. on Sunday—and follow a routine that is similar to the Christian faith,” he said. “However, they preach and sing about how good socialism is, and how good Chinese Communist Party is.”

The atheist Chinese Communist Party recognizes five traditional faiths, but seeks to push the Party line and propaganda through its state-sanctioned clergy. In Zhejiang, however, the local authorities have been pro-actively suppressing Christianity.

Since 2014, at least 2,000 churches have had their crosses torn down in Zhejiang, according to RFA. In Lanxi, a city in Zhejiang, the Chinese national flag is either raised on a flag pole or hung on a wall in over 69 places of worship.

In a June 17 report, RFA reported that the Lanxi government had issued a document instructing its municipal United Front Work Department—a Party organ responsible for intelligence gathering and agitprop tactics—to intensify efforts in teaching religious locals about patriotism through hanging up the national flags at places of worship, as well as flying the red flag and singing the Chinese national anthem on major holidays.

The Zhejiang authorities attempts to suppress Christianity in the province go beyond crude propaganda.

This April, an elderly Christian couple was buried alive by a bulldozer while trying to stop the demolition of their church in Wenzhou, a city in Zhejiang, by a government-linked demolition company, according to China Aid, a Christian human rights nonprofit. Church leader Li Jiangong survived, but his wife Ding Cuimei suffocated to death.