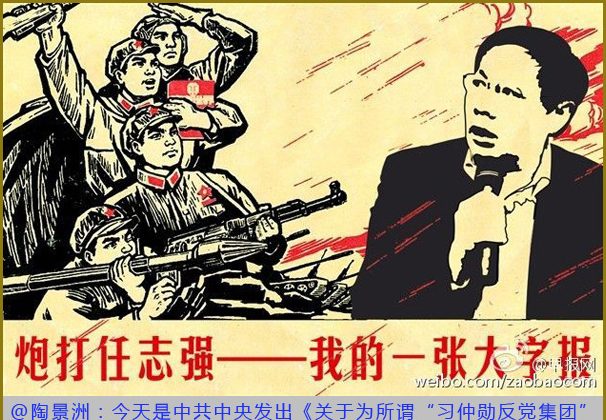 This week, former real estate entrepreneur Ren Zhiqiang, known for his outspoken online presence, was subjected to a deafening assault in the state press after he made one too many “anti-Party” statements. He also had his social media privileges taken away by censors. Elsewhere online, Internet users reflected on China’s economy, how to speak like an official, and the real meaning of China’s “harmonious society.”

Public Enemy of the Week

As a typical Cultural-Revolution-style move in denouncing a “class enemy,” Party mouthpieces published a number of articles condemning Ren, who is no longer able to defend himself publicly. One article was titled simply: “Ren Zhiqiang is the disgrace of 80 million Party members.” Another article published on official media said: “his Party spirit has been extinguished, and his human side is running amok.”

When I was abroad I found society extremely “inharmonious” judging by TV news. But when I turned off the television and walked around, I found it was so “harmonious”!

Back in China, as soon as I went out I found it’s really “inharmonious”. But when I got  home and on the television, it was indeed “harmonious” again! —Renren Blog

Explanation: The slogan “construct a harmonious society” is a core motto of the ruling philosophy of Hu Jintao, the previous Communist Party leader. However, Chinese often joke about the slogan by saying “the harmonious society only exists on TV news,” due to the Party’s media control.

Recently the Chinese authorities announced that they would begin tearing down fences around so-called “gated communities” in Beijing and other cities. The large neighborhood enclaves—prized because they are only accessible to residents, and are thus considered safer than non-enclosed communities—were said to be an impediment to traffic. Cheng Xinwen, the president of First Civil Tribunal of Supreme People’s Court of China, was recently asked the question “What legal procedure have been taken to solicit public opinions before issuing the policy?” His response, according to a news report:

Netizen’s translation: “What’s the point of going on about it? Just say ‘the Party does whatever it wants’ and leave it at that!”

@Ai Qing Li Shen: “Democracy must be something that is very, very complicated, because it is the only thing from the West that China has failed to copycat.” —Weibo

In contrast, Chinese officials spent 2 trillion yuan ($310 billion) in ‘the three public consumptions,’ which is 1,538 yuan ($235) for each of 1.3 billion Chinese citizens. So every Chinese has to hand over $235 each year for Party officials to squander in eating, drinking and traveling!” —Twitter

@Xidan Mo Ke: “Over the past 24 months, China tried all ‘economic elixirs’ that once  worked for Uncle Sam: 1) The Keynesian theory of government lifting demand; 2) The ‘Marshall Plan’ of ‘the Belt and Road Initiative’; 3) Bill Clinton’s Internet boom; 4) Milton Friedman’s monetarism; 5) Ronald Reagan’s ‘supply-side economic policies’. Oh, and I forgot to mention the circuit breaker in the stock market. But anyway, we finally returned to the old way: rely on the real estate market to drive economic growth. But this time, without walls enclosing houses.” —Weibo