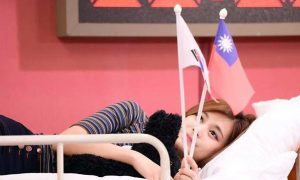 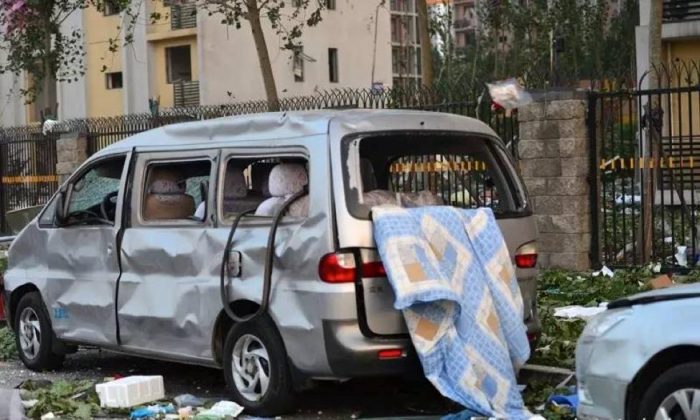 A damaged car near the explosions site in Tianjin, China, on Aug. 13, 2015, captured by a journalist sneaking past the police blockade. (He Xiaoxin/WeChat)
China

CHINA TRANSLATED: How to Get Police in China to Remove an Abandoned Vehicle

How to get help from the police

There used to be an abandoned vehicle, tires removed, outside my apartment for nearly a decade. Because it was an obstruction, residents of my apartment building called the police numerous times over ten years, requesting its removal. No officer ever came to assist. Things suddenly changed one day when the vehicle was painted with the characters “Overthrow the Communist Party.” When I woke up the next day, the car was gone.
—Aboluo

On the significance of gauze surgical masks

U.S. customs officer: Sir, we regret to inform you that your request to enter the United States is denied. The reason is, despite coming from Beijing, you don’t even bring a gauze mask in your luggage. Thus, we suspect that you never plan to go back.

Chinese customs officer: Sir, we regret to inform you that your request to enter the People’s Republic of China is denied. The reason is, despite coming to Beijing, you don’t even bring a gauze mask in your luggage. This is sufficient for us to suspect that you never plan to return to the U.S. alive.
—Twitter

On the failure of circuit breakers

Explanation: Chinese stock market regulators introduced the so-called “circuit breaker” system in the first week of 2016. The system triggered a 15-minute trade halt if the market index fall or rose by 5 percent, and closed the market for the rest of the day if fluctuation exceeds 7 percent. The new rules shut down China‘s stock market for the first two days after it went into effect. Sharp trading losses of over $1 trillion quickly piled up. The system was abandoned on Jan. 7, having been around for just four days.

@qhgy: “Since the circuit breaker was introduced into the U.S. stock market in 1988, it was only triggered once on Oct. 27, 1997. In 2016, China‘s circuit breaker was triggered the first day after taking effect. Our country accomplished in just one day what it took the U.S. nine years to achieve. Even our GDP growth rate since reform and opening up cannot boast such amazing efficiency!”
—Botanwang

Explanation: Global Times, a Party mouthpiece tabloid affiliated with People’s Daily, is notorious for its commentaries defending the Communist Party, often through the use of dubious logic.

The Dog Ate My Homework

China Animal Healthcare Limited, a Chinese drug producer listed in Hong Kong, made an unusual statement about the theft of its financial documents right before the New Year, in a season when listed companies are busy preparing their year-end financial reports for the public. The company claimed that a truck carrying four years’ of original financial documents was stolen earlier that month. “The possibility of finding the lost documents is not high,” the company said.

Some Internet users found themselves reminded of an old joke: A teacher sees one of his students crying as he walks into the classroom; “What happened?” the teacher asks. “I was just robbed!” the student cries. “Robbed of what?” “My homework!”

What makes the statement sound even more suspicious is the following fact: the company had yet to provide its annual financial report even for 2014. Its shares had been consequently halted on March 30, 2015, the due date for the report. The “theft” of the financials could not have occurred at a worse time for shareholders anxiously waiting for trade to resume.

Zhengzhou, a provincial capital in the center of China, saw one of the worst forced demolitions in modern China. On the morning of Jan. 7, the walls of the radiology room and the morgue of the Fourth Subsidiary Hospital of Zhengzhou University suddenly began being torn down by bulldozers. When the demolition began, the hospital was still operational; several doctors and patients in the collapsing rooms were made to flee. Even the corpses in the morgue were not spared.

Doctor Liu, who was then working in the radiology room, said that he saw an excavator and a bulldozer crew of over 30 people carrying out the demolition. Hospital staff even got into a conflict with the demolition team, in an attempt to protect some of the medical equipment, but they failed. Several people were injured, and equipment worth four million yuan ($610,000) was damaged.

Once it became clear that the demolition was no accident, the incident shocked Chinese Internet users. One remarked that “schools and hospitals should not be attacked even during war; that’s basic humanity.” Another exasperated user wrote: “I daresay that in the end, this incident will just become another unsolved case of forced demolition.”