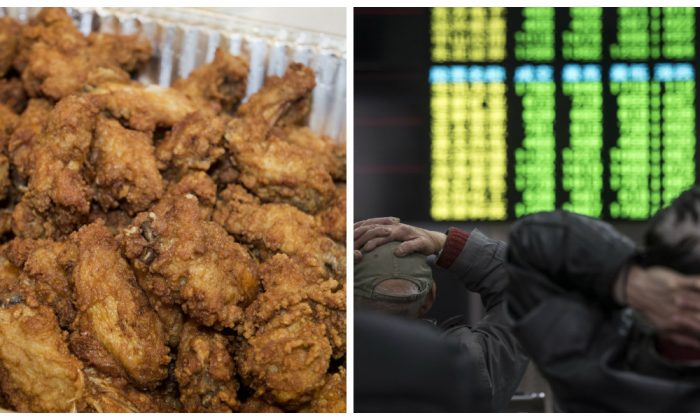 (L-R): Chicken wings are seen before a chicken wing eating contest in Washington D.C. on July 29, 2015; and Chinese investors at a brokerage house in Shanghai on Jan. 27, 2016. (PAUL J. RICHARDS/AFP/Getty Images and JOHANNES EISELE/AFP/Getty Images)
China

Today I bought chicken wings for lunch. While eating them, I read stock charts on my cell phone. A beggar came to me and asked for food. I gave him a wing, then continued to look at the charts. The beggar stood beside me, eating the wing and gazing at the screen, too. After a while, the beggar whispered to me: “MACD’s displaying a golden cross, the KDJ indicator is bottoming out, the OBV shows an expanding horn mouth. I think the price of this stock will increase.” I was shocked by what I heard: “How are you able to understand all this?” The beggar replied: “Come on! Would I have become a beggar if I didn’t?”
—Weibo

In Taiwan president elect Tsai Ing-wen’s press conference following her presidential victory speech, mainland Chinese journalists didn’t ask any questions. You know why? The announcer said questions were opened up for either “international media” or “domestic media.” Mainland Chinese media were thus confused about their identity: “Are we foreign or domestic?” In the end, they failed to figure it out through the whole session.
—Aboluo

Explanation: In 1992, China and Taiwan agreed to a “one-China” principle where both states acknowledge one China, but not which government—the Chinese Communist Party or the democratic Taiwanese government—represents the country. The Communist Party’s official rhetoric is that Taiwan is part of China, hence the confused mainland Chinese media in the joke.

After Tsai Ing-Wen won the presidential election, Mr. Zhao and Mr. Li had the following conversation. Mr. Zhao: “Just give a gun to each of the 1.3 billion Chinese people and Taiwan will be easily liberated.” Mr. Li: “Really? Just give it a try. I am 100% sure that the first place to be liberated won’t be Taiwan.”
—Twitter

@wkpub: “Those who curse the Party don’t necessarily oppose it. Their cursing may be simply because they’re not part of any vested interest group. Once the Party gives them something sweet to taste, they’ll be instantly converted to advocates for the regime. The Party never worries about this group of ‘opponents,’ as they can be easily handled. On the other hand, steadfast opponents of the Party must truly believe that freedom is priceless. The Party’s oppression and persecution is directed exactly against these people.”
—Botanwang

Last week, Washington D.C. experienced the biggest snowstorm since 1979. Days later, something even more rare occurred in Guangzhou, a southern city in China—it snowed. The historical record shows that it has only snowed nine times in Guangzhou since the 13th century, so it was a once-in-a-century event.

The snow became a festival for the city’s residents, given that many of them had never seen snow before in their lives. On the other hand, some Internet users saw the abnormal weather as an omen about the collapse of a dynasty—a belief that comes from ancient China (drawing on a non-Western epistemology) where strange phenomena in nature are interpreted as foretellings about the future of the nation or dynasty.

Bypassing the Great Firewall to Defend It

Thousands, or more, members from Liyi Ba, an online community on Baidu Tieba, performed the “occupation campaign” on Tsai’s Facebook Page with political slogans, intimidating comments, or even foul language. This was the second time that Tsai’s Facebook page has been put under “post attack” from mainland Internet users. It is unclear whether the Chinese government is involved, but the official Weibo account of the Communist Youth League Central Committee posted an already-removed Weibo article to support the campaign.

The campaign participants, believed to consist mostly of Chinese youngsters, were compared to Red Guards during the Cultural Revolution, known to be politically fanatic, naive, and morally indifferent about persecuting the “enemies” as defined by the Party.

It is well known that Facebook has been blocked by China’s Internet censorship system (the Great Firewall). Campaign participants, therefore, had to use a VPN or other circumvention technique to access Tsai’s Facebook page. The campaign was thus joked about as “bypassing the Great Firewall to defend it.”