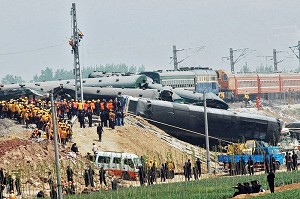 Some 400 people were taken to hospital, with 70 in a critical condition, China's official Xinhua news agency said, suggesting the death toll could rise further.

One train was en route from Beijing to the seaside resort of Qingdao when the accident happened in Zibo, Shandong province. The second train was from the resort of Yantai, in Shandong.

Both were likely operating at full speed at the time of the accident, the worst in China since 1997, a cargo worker said.

One passenger described escaping the wreckage with her 13-year-old daughter through a massive crack in the floor.

“We were still sleeping when the accident occurred,” Xinhua quoted the woman, surnamed Yu, as saying. “I suddenly woke up when I felt the train stopped with a jolt. In a minute or two it started off again, but soon toppled.”

The accident happened at a bend in the tracks and which caused the carriages to topple into a ditch, Xinhua reported, adding that blood-tainted sheets and broken thermos flasks littered the ground.

Four of the injured were French nationals, all of whom were taken to hospital with bone fractures, the report said.

The local Qilu Evening news said the railway had begun a new timetable on Monday.

State television said the rail line was built in 1897 and was due to be retired in favor of a high-speed link to be ready in time for the Summer Olympics, when Qingdao will host the sailing events.

The cargo worker said trains were already backing up near his station due to the collision.

In January, a high-speed train ran through a group of maintenance workers in the dark in Shandong, killing 18.

Monday's accident was the worst in China since 1997, when more than 100 people were killed in a train crash in the central province of Hunan.