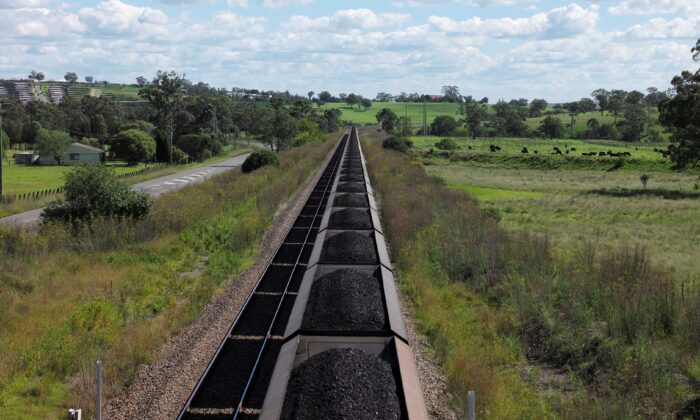 An Aurizon coal train travels through the countryside in Muswellbrook, north of Sydney, Australia, on April 9, 2017. (Jason Reed/Reuters)
Economies

LAUNCESTON, Australia—China is paying a heavy toll for its efforts to punish Australia by banning or restricting certain commodity imports, while conversely, Australia seems so far to have avoided any serious financial ramifications.

Coal is the highest-profile Chinese target in the Australia row. Beijing effectively all but banned imports from Australia as part of its efforts to pressure Canberra on several issues, ranging from Australia’s call for an international investigation into the origins of the coronavirus pandemic to the decision to block Huawei from Australia’s 5G network rollout.

China’s imports of Australian coal have collapsed, with Refinitiv vessel-tracking and port data showing just 687,000 tons were discharged in December, down from the 2020 peak of 9.46 million tons in June.

But the data also show that Australia’s overall exports haven’t really suffered, with December shipments of 33.82 million tons being the best month in 2020.

While the cold snap across north Asia boosted demand from Japan, South Korea, and Taiwan, it also appears Australia has managed to ship more coal to other regional consumers, such as India, Vietnam, and Thailand.

Coal is more than just a volume story, with prices moving in favor of Australia and against China.

Australia’s coal exports were worth A$3.7 billion ($2.87 billion) in December, the most since May last year, according to data from the Australian Bureau of Statistics.

The benchmark Australian thermal coal price, the Newcastle Weekly Index, as assessed by commodity price reporting agency Argus, ended at $87.52 a ton on Jan. 22. That was up 89 percent from its 2020 low of $46.37, reached in September, at a time when market concern over the impact of China’s effective ban on imports was highest.

The rise in seaborne coal prices has made it more expensive for China to buy imported coal. In turn, that has allowed domestic prices to remain elevated as they aren’t facing competition from overseas producers.

But even with the recent drop, the Chinese benchmark is still some 87 percent higher than the 2020 low of 467 yuan a ton from May—well above the 520-570 yuan range believed to be preferred by the authorities as it ensures mines remain profitable but fuel costs for utilities aren’t too high.

It’s not just coal where Australia seems to be more than holding its own in the trade dispute: exports of cereals rose to A$1.19 billion in December, the highest on record and almost three times the value of shipments in November.

China imposed an 80.5 percent tariff on imports of Australian barley in May 2020, collapsing the trade between the two nations. But while Australian barley farmers were initially hit hard, they have successfully managed to switch to alternative markets or plant other crops.

China also has an unofficial ban on imports of copper ores and concentrates from Australia, which had been its fifth-biggest supplier.

However, a global shortage of mined copper ores means China is being forced to pay more for supplies. At the same time, its smelters are having to pay less for treatment and refining charges, as they struggle to source material.

Again, what has happened is that China has cut itself off from a source of supply at a time of global shortage. It has imposed costs on itself and no penalty on Australian copper miners, who can sell easily to other buyers.

China hasn’t mandated any restrictions on the most important commodity it buys from Australia, namely iron ore. But it is having to pay handsomely for buying the steel-making ingredient given supply issues in Brazil, the second-largest exporter behind Australia.

Australia’s exports of metal ores, which include iron ore and copper, rose to a record A$15.2 billion in December, up 22.6 percent in November, according to official statistics.

Overall, Australia’s exports to China were A$13.34 billion in December, the highest since June, reflecting strong demand for iron ore, liquefied natural gas, and some agricultural commodities.

Since China started its trade actions against Australia, the numbers seem to be tilting heavily in favor of Canberra.