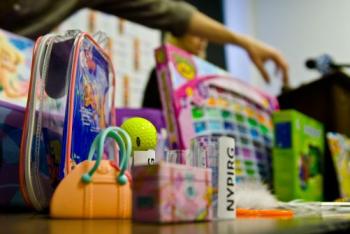 Joshua Philipp
Joshua Philipp is an award-winning investigative reporter with The Epoch Times and host of EpochTV's "Crossroads" program. He is a recognized expert on unrestricted warfare, asymmetrical hybrid warfare, subversion, and historical perspectives on today’s issues. His 10-plus years of research and investigations on the Chinese Communist Party, subversion, and related topics give him unique insight into the global threat and political landscape.
View profile
Follow
biggersmaller
Print
NEW YORK—Two new reports on toxic toys will give holiday shoppers a heads up on which products could be harmful to their children and families.

The New York Public Interest Research Group (NYPIRG) released two reports about toxic toys on Dec. 3, including their second annual consumer guide to toxic chemicals in toys. Representatives from NYPIRG met with reporters near City Hall in Manhattan to present their findings, as well as some of the toys that shoppers should be cautious of.

Tracy Schelton, a consumer attorney for NYPIRG said that researchers for the reports had tested over 1,500 popular children's toys for harmful chemicals such as lead, arsenic, mercury, and others. “One in three of the toys that were tested were found to contain medium to high levels of chemicals of concern,” said Schelton.

“There's no place for these kinds of substances in children's toys,” she said.

According to the findings of the report, many of the toxic toys came from China, yet other counties were also found to have manufactured toxic toys. Schelton pointed out that all of the dangerous toys on display during the press meeting were made in China.

“Most of the toys are made in China. In fact, I believe every toy here is made in China,” said Schelton. “That was a big news bulletin in 2007 and was very disturbing when we found that there are so many toys that are made with much more relaxed standards than we would like to see them made under.”

According to the report,  lead was found in 20 percent of all products that were tested this year. The report states that scientists have found that there are no safe levels of lead for children. Cadmium, mercury, arsenic, and bromine were also found in numerous products. Of the 1,500 toys tested, 18.9 percent of the toys were found to contain arsenic, and 45 toys were found to contain bromine levels at concentrations of 1,000 parts per million or higher.

“Lead is a powerful neurotoxin that causes chronic problems. It lowers I.Q. and causes behavioral problems such as violence,” said Lani Combier-Kapel, a Hunter College student and NYPIRG chapter member.

Pointing to a small musical instrument set, Combier-Kapel said, “This toy contains over 16 times the current legal limit of 600 parts per million lead as established by the 2007 code of federal regulations.”

The new Consumer Products Safety Improvement Act, which is to be implemented February 2009, will help to better protect consumers from harmful products. NYPIRG warned that since the act will not be officially set into place until 2009, manufacturers will not need to abide by its standards this Christmas.

According to NYPIRG, there is some controversy over the report with the Consumer Product Safety Commission (CPSC) over regulations on phthalate, a toxic chemical used in plastics. The new act would ban toys for children that contain concentrations over 0.1 per cent of phthalate. According to a NYPIRG press release, the CPSC told companies that they could continue to sell toys with phthalate after the new act is passed, until their stock of the toxic product runs out.

The reports, which include a list of both toxic and safe toys, can be found at: www.healthytoys.com.