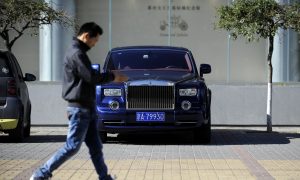 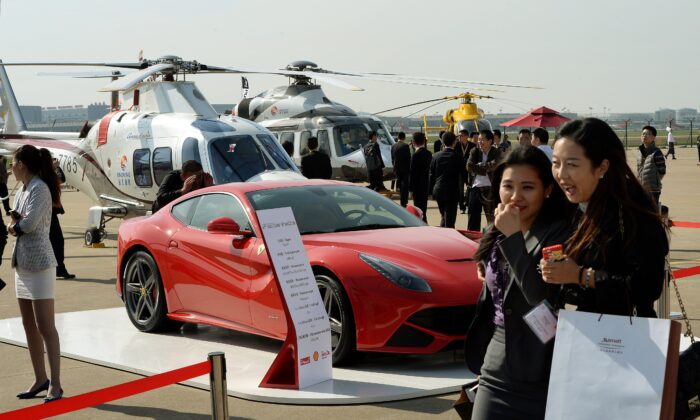 People walk past a Ferrari and helicopters during the Asian Business Aviation Conference and Exhibition at the Shanghai Hongqiao International Airport on April 14, 2014. (Mark Ralston/AFP via Getty Images)
Social Issues

China Tops List of Countries for Most Millionaires Moving Abroad

A recent research report published by AfrAsia Bank listed the top 10 countries in the world that had the largest outflow of high-net-worth individuals (HNWI) in 2019. China topped the list with the most millionaires leaving for other countries in that year, followed by India.

The study only covered HNWIs with a net worth of $1 million to $9.9 million who have settled in a new country for at least six months. The report also listed the top destinations for millionaires.

China saw 16,000 millionaires leave in 2019, much more than India in second place, which saw 7,000 of its financially wealthy leave the country. Russia ranked third with 5,000 leaving, followed by Hong Kong in fourth place, with 4,200 leaving the politically troubled city. Turkey, the UK, France, Brazil, Saudi Arabia, and Indonesia rounded out the top 10.

According to the report, the top reasons for the millionaires to leave for other countries varied from tax, financial concerns, and work opportunities, to the environment, better education, better health care, and escaping oppressive regimes.

As for the receiving countries, Australia topped the list, attracting 12,000 HNWI in 2019. The United States was second, with 10,800 HNWI, while Switzerland ranked third with 4,000. Portugal and Greece were also among the top 10 countries attracting HNWI, as they have investor immigration programs for EU residency and citizenship.

The report also stated that 30 percent of the HNWI emigrated with investor visas, while others used traditional means such as work visas, family visas, and obtaining second passports through ancestry.

International media have reported that many rich Chinese citizens are fleeing China’s polluted cities and strict government, while also looking to protect their wealth. A number of China’s billionaires also left the country in 2020. SCMP reported that in 2014, “a Barclays Wealth Report found that around half of China’s rich intended to move to another country within five years.”

Among China’s rich are Chinese officials, who have been known to be sending their family members and moving their wealth to Western countries for years. As there are so many of them, the media has even given the phenomena the name “naked officials.” The brokers, both Chinese and Western, who help the officials move the money they accumulated in China through their official positions to offshore banks and invest in international businesses and properties are known as “white gloves.” Many Chinese businessmen have gotten rich through close connections with the regime’s officials and the communist party—benefiting from favorable policies and treatment.

In 2015, Chinese leader Xi Jinping launched “Operation Fox Hunt,” sending secret Chinese agents to foreign countries—including those that don’t have extradition treaties with China—to locate and transfer corrupt officials back to China. It’s been revealed in media reports in recent years that “Operation Fox Hunt” has also been used by the regime to target overseas Chinese dissidents and their family members.