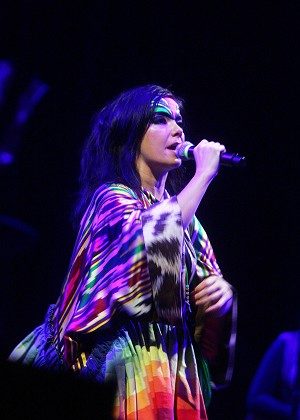 China to Tighten Control on Singers After Bjork Embarassment

SHANGHAI—China will tighten its controls over foreign singers and other performers after Icelandic singer Bjork shouted “Tibet! Tibet!” at a Shanghai concert last weekend, the Ministry of Culture said on Friday.

Bjork chanted the name of the Chinese-ruled Himalayan region after performing her song “Declare Independence”, which she has used in the past to promote independence movements in other places such as Kosovo.

The performance “not only broke Chinese laws and regulations and hurt the feelings of Chinese people, but also went against the professional code of an artist,” the ministry said in a statement quoted by the Communist party mouthpiece, Xinhua news agency.

“Any attempt to separate Tibet from China will definitely be opposed by the Chinese people and all righteous men across the world.”

The ministry said it would investigate the concert and handle the matter according to the law. It did not elaborate.

Bjork said on her Web site that her references to independence were more personal than political, but she added:

“The fact that it has translated to its broadest meaning, the struggle of a suppressed nation, gives me much pleasure. I would like to wish all individuals and nations good luck in their battle for independence.”

The Free Tibet Campaign, a British-based organisation which calls for an end to China's rule of Tibet, issued a statement saying it was delighted by Bjork's performance.

“She's shown more courage than politicians like (British Prime Minister) Gordon Brown and (British Foreign Secretary) David Miliband, whose public silence on these issues during recent trips to China is a source of shame for the British people,” the campaign said.