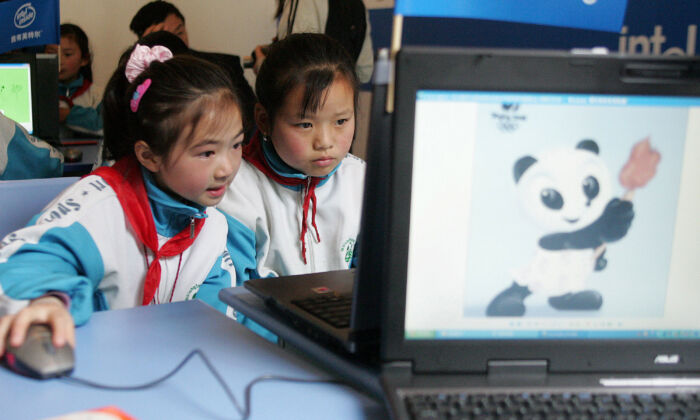 Students use computers to gather information in the Shawan Primary School in Wolong of Sichuan Province, China on May 20, 2005. (China Photos/Getty Images)
Social Control

China’s cyberspace watchdog recently announced that it will set up governance rules and systems for algorithms in the next three years or so, together with other Chinese-state bodies.

The new policy is set to influence user choice, as the regulator said algorithms—which the internet and online search runs on— should strictly align with the interest of the ruling Party and national security initiatives, according to a Sept. 29 statement published by the Cyberspace Administration of China on Chinese social media platform, WeChat.

Tightened algorithms developed by technology firms aim to “uphold core values of socialism” and to crack down on anything the regulator deems a violation.

“The application of algorithms should adhere to the correct political direction, public opinion guidance, and value orientation,” the statement said.

According to internal government documents previously obtained by The Epoch Times, in 2017, Chinese leader Xi Jinping articulated a vision of “using technology to rule the internet” to achieve total control over every part of the online ecosystem, including applications, content, quality, capital, and manpower.

In another speech, given in April 2016, Xi confidently proclaimed that in the “struggle” to control the internet, the Chinese Communist Party (CCP) has pivoted from playing “passive defense” to playing both “attack and defense” at the same time, according to an internal document by the Anshan city government in Liaoning Province.

These statements confirm efforts made by Beijing within the past few years to promote its own authoritarian version of the internet as a model for the world.

Although Chinese authorities have framed the governance rules for algorithms as necessary for the public good, observers believe the latest regulatory efforts by the CCP are a form of ideological control.

The CCP recently rolled out new crackdowns in the past few months, both online and offline, over education, gaming, e-commerce, and entertainment industries. The initiatives were promoted by Chinese state media as a “profound revolution” and a return to the essence of socialism.

The regime also introduced “Party leadership” related content into mandatory textbooks from grade school through college, in a bid to “gradually form” the confidence of the youngsters in supporting socialism and the CCP’s leadership, China’s education ministry said in July.

Last week, a European government report found some locally sold China-made phones have a built-in censorship system to detect and block sensitive terms, such as “democratic movement,” without the user’s permission.