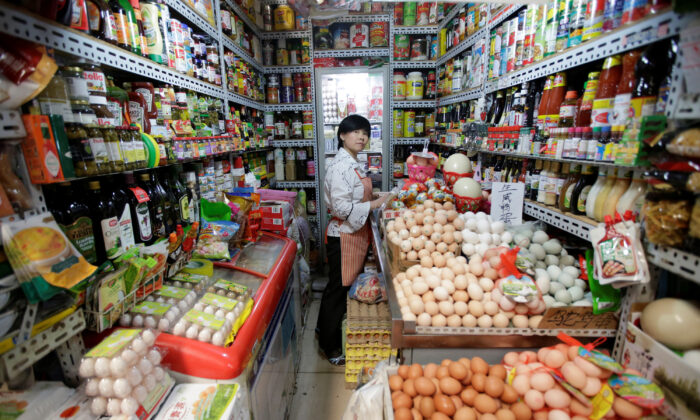 A vendor is seen in her store at a supermarket in downtown Beijing, China on May 23, 2019. (Jason Lee/Reuters)
By Reuters

BEIJING—China has decided to keep its inflation target unchanged this year at around 3 percent, sources say, suggesting policymakers will continue to roll out more economic support measures while avoiding aggressive stimulus.

Some analysts have speculated that Beijing will raise the inflation target to 3.5 percent, which would give authorities more room to support the world’s second-largest economy as growth tails off to the slowest in nearly 30 years.

But policy sources told Reuters the Chinese regime expects surging food prices to start easing in the second half of the year, as it takes steps to address pork shortages.

The 2020 inflation target, to be unveiled at the annual parliamentary session in early March, was endorsed by top leaders at the annual closed-door Central Economic Work Conference last month, according to three sources with knowledge of the meeting’s outcome.

“The target will still be around 3 percent,” one of the policy sources said. “We cannot rule out the possibility that inflation may break 5 percent in the coming months but that could be short-lived.”

The State Council Information Office and the National Development and Reform Commission—the state planner, did not immediately respond to Reuters’ requests for comment.

China’s consumer price inflation (CPI) accelerated to a near eight-year high of 4.5 percent in November, as pork prices doubled due to a massive outbreak of African swine fever, but producer prices have remained in deflation for five straight months.

The diverging price trends have complicated policymakers’ efforts to revive activity without risking overstimulating the economy.

While Beijing has rolled out a series of support measures in the last two years, mainly in the form of higher infrastructure spending and tax cuts, leaders have pledged they will not embark on massive stimulus like that during the 2008-09 global crisis, which saddled the economy with a mountain of debt.

China has kept its inflation target at around 3 percent since 2015.

While food prices have spiked, there has been little sign of a pick-up in inflation across the broader economy, suggesting demand remains sluggish. Core inflation—which excludes food and energy prices—has stayed largely subdued.

“Currently, the CPI rise is mainly due to pork prices—this is a structural, not a broad-spread price rise. Pork prices could start to fall in the second half,” said a second source.

“A lower inflation target could help cool down the inflation expectation which is one of major forces driving up the headline inflation during the upper cycle,” said Steven Zhang, chief economist and head of research at Morgan Stanley Huaxin Securities.

“The government may have higher than expected confidence to curb the food inflation despite the surging pork prices.”

On Wednesday, the central bank announced its eighth cut since early 2018 in banks’ reserve requirements (RRR), or the amount of cash that banks must hold as reserves, in a bid to shore up the economy.

Analysts expect at least one more RRR cut this year.

The central bank has also begun lowering its key lending rate in recent months, with more expected possibly before the end of this month, but the cuts have been far smaller than substantial easing in the United States and many other economies over the past year.

Policy sources have told Reuters that Beijing plans to set a lower economic growth target of around 6 percent in 2020.