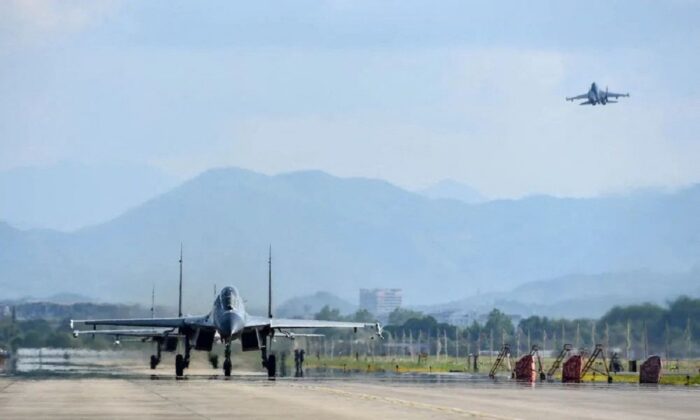 The Chinese military will from now on conduct “regular” drills on the eastern side of the median line of the Taiwan Strait, Chinese state television reported on Sunday, citing a commentator.

The median line in the narrow strait between the island of Taiwan and mainland China is an unofficial line of control that military aircraft and battleships from either side normally do not cross.

Chinese and Taiwanese warships played high seas “cat and mouse” on Sunday ahead of the scheduled end of four days of unprecedented Chinese military exercises launched in reaction to a visit to Taiwan by U.S. House Speaker Nancy Pelosi.

Pelosi’s visit last week infuriated the Chinese regime, which regards the self-ruled island as its territory and which responded with test launches of ballistic missiles over the island’s capital for the first time and the cutting of some areas of dialogue with Washington.

Taiwan’s defense ministry said multiple Chinese military ships, aircraft, and drones were simulating attacks on the island and its navy. It said it had sent aircraft and ships to react “appropriately.”

In a statement later on Sunday, the ministry said it had detected 14 Chinese warships and 66 Chinese aircraft in and around the Taiwan Strait.

It was not immediately clear if China had ended the drills on Sunday, as previously announced.