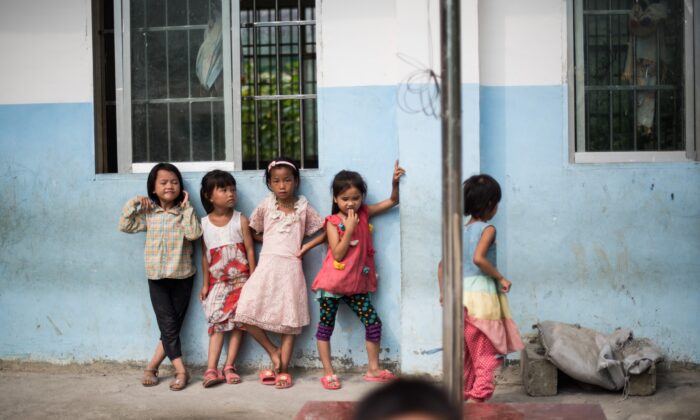 Children playing in the schoolyard of the Chongshan Primary School in the town of Longfu Township, in Guangxi. (Johannes Eisele /AFP via Getty Images)
Social Issues

An autonomous region in China has started allowing couples to have up to four children, if certain conditions are met, in an attempt by the regional government to boost the population in some local communities that were previously abiding by the three-child limit.

On March 24, Guangxi Zhuang Autonomous Regional People’s Congress passed a new amendment to the region’s “Population and Family Planning Law.” It stipulates that couples who already have three children can have a fourth child if both the husband and wife’s places of residence are registered in counties along the China-Vietnam border.

Guangxi has eight counties bordering Vietnam that are populated by ethnic minorities such as the Zhuang, Yao, Miao, and Jing, in addition to the Han Chinese, the largest ethnic group in China.

Under the Chinese Communist Party (CCP) rule, citizens do not have free reproductive rights. However, the CCP has made a series of amendments to its child-limiting policies, attempting to avert a demographic crisis that could dash its plans for building global dominance.

In 1979, the CCP began a birth planning program that strictly limited most couples to just one child. Known as the one-child policy, it was enforced with hefty fines, job loss, detentions, beatings, forced sterilizations, and forced abortions.

Chinese officials and state media had touted the policy’s success in preventing 400 million births over three decades in the world’s most populous country, claiming it had helped conserve natural resources, drive economic growth, and served as a “valuable lesson” for the world.

The regime relaxed the policy in 2016 by allowing two children per family as it struggled to cope with a plummeting birthrate, an aging population, and a shrinking workforce. A preference for sons also led Chinese parents to abort or abandon baby girls, causing one of the biggest population gender imbalances in the world.

In August 2021, the Chinese regime officially wrote its new three-child policy into law, marking Beijing’s latest attempt to boost its population and prevent a demographic crisis.

China’s population growth rate has fallen to its lowest level in six decades, barely more than the number of deaths in 2021, The Guardian reported.

According to the national statistics bureau, 10.62 million babies were born in 2021, a birth rate of 7.52 per thousand people. In the same period, 10.14 million deaths were recorded, a mortality rate of 7.18 per thousand, thus, producing a population growth rate of just 0.34 per thousand.

The data also showed that at least 13 Chinese provinces had entered a “negative growth” state in 2021.

Yuan Xin, vice-president of the China Population Association and a professor of demography at Nankai University in Tianjin, admitted to a state-owned news media that China’s population is approaching “zero growth.”

When asked why Guangxi’s border counties are taking the lead in allowing a fourth child, Yuan responded that it was mainly due to border security.

According to Yuan, there is a significant population outflow in the border regions as they are remote and primarily consist of rural or small towns. Thus, maintaining a certain population in those regions is conducive to border security.

“A larger population does not mean security. Border security is not something that ordinary citizens can decide. It is up to the border guards. Besides, they should live in harmony with the neighboring country,” Li told The Epoch Times.

“Under the CCP’s autocratic centralized power, a [regional government] has absolutely no power to change regulations on the number of births. Local officials do not have the authority. These [amendments] were surely allowed by the central government.”

Li believes the CCP is looking to conduct a pilot experiment in an area with less impact—a sparse population and weak economy—as it might be looking to implement the new policy in more regions across the nation.

“That’s what I believe to be a more reasonable explanation [for the regime to permit a fourth child in Guangxi’s border regions]. Adjusting what should’ve been the people’s reproductive rights is the regime’s last resort,” Li added.