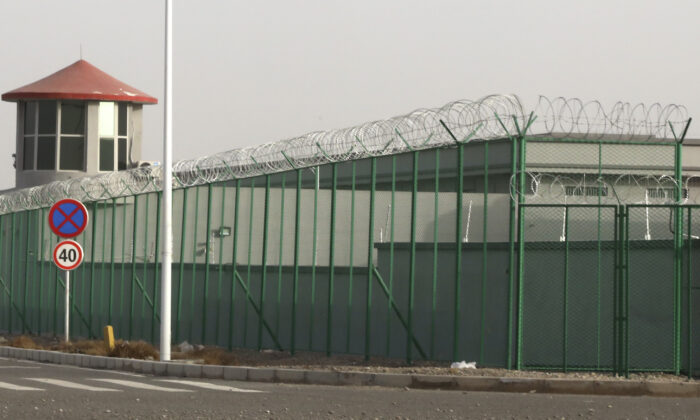 A guard tower and barbed wire fences are seen around a facility in the Kunshan Industrial Park in Artux in western China's Xinjiang region on Dec. 3, 2018. People in touch with state employees in China say the government in the far west region of Xinjiang is destroying documents and taking other steps to tighten control on information. (Ng Han Guan/AP Photo)
China Human Rights

China Tightens Up on Info After Xinjiang Leaks

The Xinjiang regional government in China’s far west is deleting data, destroying documents, tightening controls on information and has held high-level meetings in response to leaks of classified papers on its mass detention camps for Uyghurs and other predominantly Muslim minorities, according to four people in contact with government employees there.

Top officials deliberated how to respond to the leaks in meetings at the Chinese Communist Party’s regional headquarters in Urumqi, Xinjiang’s capital, some of the people said. They spoke on condition of anonymity because of fears of retribution against themselves, family members and the government workers.

The meetings began days after The New York Times published last month a cache of internal speeches on Xinjiang by top leaders including Chinese leader Xi Jinping. They continued after the International Consortium of Investigative Journalists worked with news organizations around the world including The Associated Press to publish secret guidelines for operating detention centers and instructions on how to use technology to target people.

The Chinese regime has long struggled with its 11-million-strong Uyghur population, an ethnic Turkic minority native to Xinjiang, and in recent years has detained 1 million or more Uyghurs and other minorities in the camps.

Xinjiang officials and the Chinese foreign ministry have not directly denied the authenticity of the documents, though Urumqi Communist Party chief Xu Hairong called reports on the leaks “malicious smears and distortions.”

The Xinjiang government did not respond to a fax for comment on the arrests, the tightened restrictions on information and other measures responding to the leaks. The Chinese Foreign Ministry did not have an immediate comment.

Xinjiang’s government had already mandated stricter controls on information in October, before the news reports, according to three of the people, all Uyghurs outside Xinjiang.

They include orders for community-level officials to burn paper forms containing sensitive personal details on residents in their area such as their detention status, and for various state offices to throw away computers, tighten management of classified information, and ensure all information related to the camps is now stored on databases disconnected from the internet in special, restricted-access rooms to bar hackers, the Uyghurs said.

“They became much more serious about the transfer of information,” one said.

Publication of the classified documents prompted the central government in Beijing to put more pressure on Xinjiang officials, several of the Uyghurs said.

Restrictions on information appear to be tightening further. Some university teachers and district-level workers in Urumqi have been ordered to clean out sensitive data on their computers, phones and cloud storage, and to delete work-related social media groups, according to one Uyghur with direct knowledge of the situation.

In other cases, the state appears to be confiscating evidence of detentions. Another Uyghur who had been detained in Xinjiang years before said his ex-wife called him two weeks ago and begged him to send his release papers to her, saying eight officers had come to her home to search for the papers, then threatened she’d be jailed for life if she couldn’t produce the papers.

“It’s an old matter, and they’ve know I’ve been abroad for a long time,” he said. “The fact that they suddenly want this now must mean the pressure on them is very high.”

Some government workers have been rounded up as the state investigates the source of the leaks. In one case an entire family in civil service was arrested. Abduweli Ayup, a Uyghur linguist in exile, said his wife’s relatives in Xinjiang—including her parents, siblings, and in-laws—were detained shortly after the leaks were published, although Ayup said they had no relation to the leaks as far as he was aware. Some people in touch with relatives outside China were also investigated and seized, Ayup said.

It is unknown how many have been detained since the leaks.

Earlier this week, a Uyghur woman in the Netherlands told a Dutch daily, de Volkskrant, that she was the source of the documents published by the International Consortium of Investigative Journalists. The woman, Asiye Abdulaheb, said that after she posted one page on social media in June, Chinese state agents sent her death threats and tried to recruit her ex-husband to spy on her.

The leaked documents lay out the Chinese regime’s deliberate strategy to lock up ethnic minorities even before they commit a crime, and to rewire their thoughts and the language they speak. They reveal that facilities Beijing calls “vocational training schools” are forced ideological and behavioral re-education centers run in secret.

The papers also show how Beijing is pioneering a new form of social control using data and artificial intelligence. Drawing on data collected by mass surveillance technology, computers issued the names of tens of thousands of people for interrogation or detention in just one week.

The leaks come at a delicate time in relations between Washington and Beijing, amid ongoing negotiations to end a trade war and U.S. concerns about the situation in Hong Kong, a Chinese-ruled city where police have clashed with pro-democracy protesters.