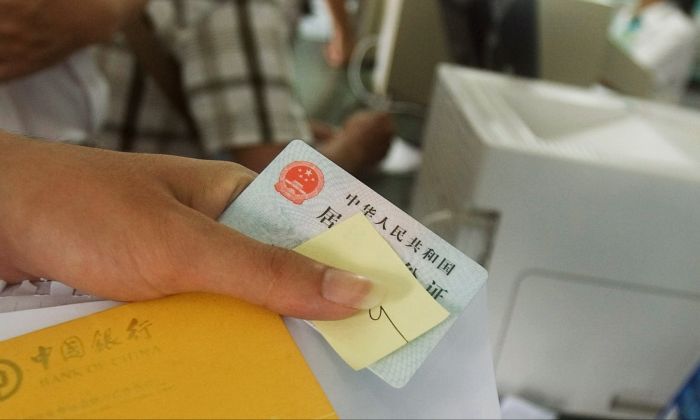 A Chinese citizen shows his ID card and bank book at a branch of the Bank of China in Sanya City, Hainan Province, China, on May 5, 2008. (Feng Li/Getty Images)
Social Control

The Cyberspace Administration of China issued new regulations on June 27 requiring all online platform operators to authenticate users’ identities and verify the account information submitted by users during registration.

The new regulations require the network information service provider to display user IP addresses on their page of account information, which would facilitate Beijing’s monitoring of user locations.

The new rules will take effect on Aug. 1, when companies will need to validate every user’s online identity.

Current affairs commentator Lu Bei told The Epoch Times that the new rules allow the regime to maintain its control over information as it faces growing criticism online.

Lu said that Beijing aims to extend its centralized control of information systems into citizens’ everyday lives, supervising their every move. The regime has been known to use network technology in a way that violates the rights and privacy of ordinary citizens, while at the same time failing to monitor the movement of criminals.

He said a recent example is the regime’s use of the compulsory COVID health app to stop depositors, whose savings were frozen by rural banks, from protesting.

Several depositors told The Epoch Times on June 14 that the health code on their COVID-19 contact tracing app turned red as soon as they scanned barcodes for venues in Zhengzhou, the provincial capital of central Henan Province.

Across Henan, tens of thousands of people have been fighting to recover their banked savings for more than two months.

The crisis started in April, when at least four lenders in Henan froze all cash withdrawals, citing internal system upgrades. But customers said that neither these banks nor officials have since offered any information on why or how long the process will take, prompting angry protests outside the banking regulator’s office in Zhengzhou in May.

On June 28, China’s Ministry of Public Security said on its public WeChat account that its cybersecurity department had investigated more than 600 cases of “illegal” posts by the “internet water army” or “internet navy”—many fake accounts that get paid to post positive comments to inflate companies’ online image—and arrested more than 4,000 suspects, according to the state-run People’s Daily.

The report said that those commentators had spread unfavorable views of China’s economy and that some had released “illegal and harmful information to manipulate or disrupt the order of online public opinion.”

Lu believes that Beijing’s crackdown on the so-called “illegal internet navy” is to keep people from talking about hot topics, such as the “Iron Chain Woman” human trafficking scandal, the “nightmare” lockdowns in Shanghai, the Tangshan women-beating incident, and the Zhengzhou bank depositor incident.

“Any topic that concerns the ordinary citizen is suppressed, and inappropriate comments are filtered out, taken down, or attached with warning labels. People are deprived of freedom and labeled criminals for ‘picking quarrels and provoking trouble,’” Lu added.

“Meanwhile, the ‘legal’ Internet navy is paid for by the Chinese Communist Party. They are reportedly paid ‘fifty cents’ for every pro-CCP remark or in exchange for a reduced jail sentence.”