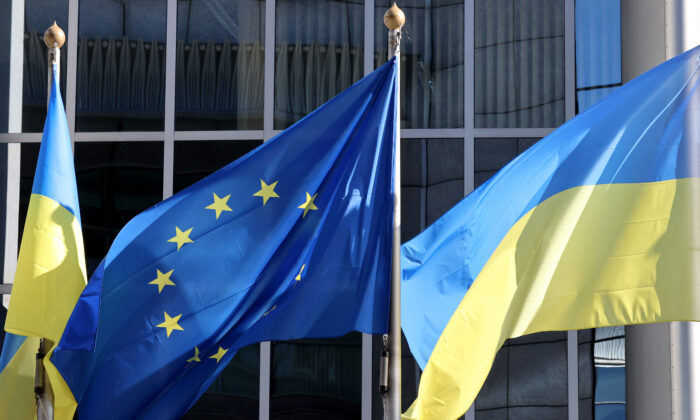 The Ukrainian flag flutters alongside the European Union flag outside the European Parliament headquarters to show their support for Ukraine after the nation was invaded on Feb. 24 by Russia, in Brussels, on Feb. 28, 2022. (François Walschaerts/AFP via Getty Images)
Thinking About China

China Threatens the Breakup of Europe

Europe and America should respond with tripwire troops in Taiwan

As Russian President Vladimir Putin escalates the war in Ukraine to that of nuclear threats, massacre, and the systemic rape of children in cities like Bucha, China continues its diplomatic support of Russia, including now by threatening the breakup of the European Union.

China’s state-controlled Global Times mooted the idea under the guise of a friendly warning on April 18, after Ukrainian President Volodymyr Zelenskyy said that Ukrainians are prepared to fight a ten-year war against Russia. Such a war, warned this most nationalist of Beijing mouthpieces, could lead to the breakup of Europe and its control by the United States.

“It is exactly due to the continuous flow of economic and military aid from the US and NATO that has prolonged the military conflict, cheering Ukraine up to fight a 10-year war,” according to the anonymous Global Times author.

After a “bleeding decade” of war over Ukraine, “Europe, being entangled in a war, will completely lose its security autonomy and become fully reliant on the US umbrella. It will have to confront a 10-year crisis on energy, food, refugees and inflation. Social turmoil will surface. The [EU] bloc may even split on the issue.”

Despite Beijing and Moscow’s “no limits” partnership, meant to deter the United States, they clarified recently that the violence in Ukraine is apparently entirely the fault of our evil capitalist country and its NATO lapdogs.

The Chinese Communist Party (CCP) thus seeks to divert blame and use threats and scare tactics against Brussels to separate it from Washington. It’s not hard to understand why.

Together, the two democratic superpowers and their allies in places like Japan and Taiwan, from an economic and increasingly military standpoint, are the world’s best hope for defending the international system against the plans of Beijing and Moscow to expand territorially and create a “new type” of international relations.

If Ukraine and Xinjiang are any indication, this “common destiny” envisioned by Beijing will be no walk in the park. At best, it will be totalitarian developmentalism of the sort that creates ghost cities and failed property developers in loan default. At worst, genocide and civil war will emerge on every continent, as the citizens of formerly democratic countries resist the kind of neocolonialism doled out by the CCP to Uyghurs in Xinjiang. It could be one and then the other. We all need to wake up and mitigate the risk of any of the above.

In the short term, Beijing wants the European Union to cave to Russian demands and pressure Zelenskyy into conceding control of all of Ukraine to Moscow. This would strengthen the credibility of Beijing’s threat against Taiwan, and make forced unification of the island democracy more likely, and with less effort.

It would also relieve a major source of diplomatic discomfort in Beijing, which is increasing attention to its failure to denounce the Russian military’s egregious violence.

But Moscow and Beijing badly miscalculated the unity and commitment of Washington, Brussels, and London to protecting Ukraine from Putin’s bloody assault. We aren’t fools.

As noted by Didi Tang in The Times of London on April 19: “Beijing is trying to sow division in the West by exploiting any differences between European and US policy in support of Ukraine. Beijing is worried that a united front will damage its ambitions to rival Washington.”

Beijing is already taking notes on Ukraine and revising its plans to invade Taiwan accordingly. According to a Chinese military source quoted by Nikkei Asian Review on April 20, China’s military planners expect to invade Taiwan within the seven-day period that it would take U.S. Marines stationed on Okinawa to obtain permission from Washington to land in, and militarily reinforce, the island democracy. To deter this, given the demonstrated power of U.S. and allied defensive weapons used against Russian invaders, Beijing is increasing its nuclear arsenal.

In other words, the CCP plans to threaten nuclear war against the United States to keep it from protecting Taiwan. Russia is hinting at a similar threat now, to stop the influx of military supplies to Ukrainian forces.

Beijing and Moscow are thus trying to use their nuclear weapons as not only a deterrent force, but a compellent force. They want to compel the world’s democracies into following their wills, and if given half a chance, they will do so.

All this to say that democracy, of which the United States, the EU, and allies like Japan are the world’s biggest defenders, relies on the unity of these countries, and more, in keeping up the pressure of economic sanctions on Moscow and arms shipments to the brave defenders of Ukraine.

But let’s think beyond the war today. After all, Ukraine is an object lesson in the failure of weak deterrence. Ukrainians will ultimately win the war, but only after losing millions of citizens and dozens of cities to Putin’s bombs.

Democracy also depends on effective deterrence, which can only be achieved through strength. Deterrence in Taiwan is currently weak, thus inviting an attack by Beijing. To forestall that sad eventuality, and protect democracy on a global level, thus requires increasing the defense of Taiwan by preemptive emplacement of defenses. These can and should include tripwire troops and nuclear weapons.