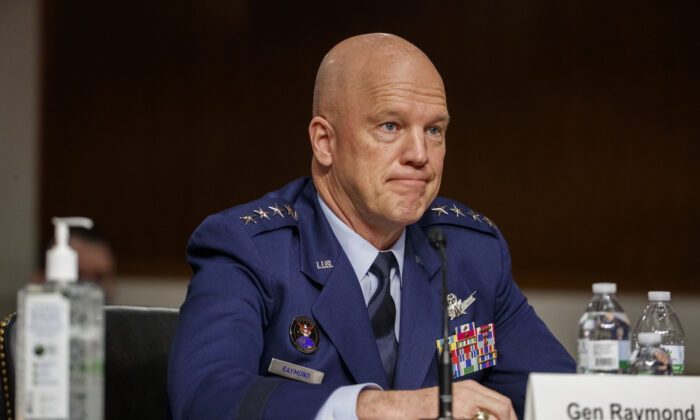 Chief of Space Operations at U.S. Space Force General John W. Raymond testifies before the Senate Armed Services Committee hearing on the Department of Defense Spectrum Policy and the Impact of the Federal Communications Commissions Ligado Decision on National Security during the COVID-19 pandemic on Capitol Hill in Washington, on May 6, 2020. (Shawn Thew/Pool/Getty Images)
Military

The Chinese Communist Party’s (CCP) efforts to militarize outer space are threatening the United States’ ability to defend itself and project power, according to the U.S. Space Force’s chief of space operations.

“China has gone from zero to 60 very quickly,” said Gen. John Raymond. “They are clearly our pacing challenge.”

“Today, more so than in the past, we have to worry about protecting and defending [our] satellites.”

Raymond delivered the remarks at the Aspen Security Forum on July 20, where he said that the United States would need to lead the world in developing international norms of behavior for space.

Raymond said that developing more codified rules for space and further developing U.S. space systems are important given the essential role of space-based technologies in deterring conventional conflicts and preventing the escalation of hostilities.

“Space provides a great opportunity to have one more … means to change the deterrence calculus … and to deter conflict from beginning or extending into space, which we feel would deter a conflict from spilling over onto land,” Raymond said.

He noted that virtually all of the world’s most vital systems—from GPS to missile defense to international banking verification—are space-based. And space, Raymond said, is becoming more congested, more competitive, and more contested.

China on the Horizon

Beyond mere space debris, however, Raymond said that China’s communist regime poses a serious threat to the United States’ interests in space, and that the regime is building out a suite of different weapons to attack U.S. space infrastructure.

“There’s a full spectrum of threats that we’re worried about,” Raymond said.

“Everything from reversible jamming of communication satellites and GPS satellites … to kinetic destruction.”

Raymond added that the CCP is reaching “near parity” with the United States regarding its space capabilities and is working to develop technologies that could seize the military, civil, or commercial advantage in space.

“They have seen the advantages that space has provided us as we’ve integrated space and cyber and multi-domain operations, and, to be honest, they don’t like what they see.”

Raymond’s comments to that end were reminiscent of those made by Space Force Gen. David Thompson back in November, who said that China and Russia are conducting reversible attacks on U.S. satellites “every single day.”

To that end, Raymond said that establishing “rules of the road” for the international community is vital to securing space, even if it was a foregone conclusion that the CCP wouldn’t obey those rules. By at least having a solidified framework, Raymond said, China’s hostile actions in space could be measured and recorded.

“I firmly believe that we need to develop norms of behavior, rules of the road. The U.S. and its partners are working on that.”

“And today, one of the challenges is there are no rules or very few rules. It’s the wild, wild west.”

Raymond added that China threatens “every instrument of national power.” Still, he assured the audience that the Space Force would do everything in its power to prevent the CCP from escalating its aggression in space into a bona fide war.

“We come to work every day wanting to deter great power war,” Raymond said. “That’s what we do.”