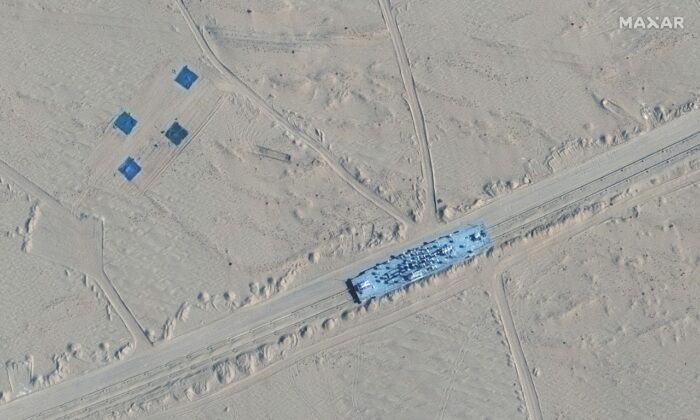 Analysis of new satellite images suggests that the Chinese military is testing its ability to target ships in port with long-range ballistic missiles. The discovery may shed light on the Chinese Communist Party’s (CCP) efforts to develop a military capable of decapitating U.S. forces in the Indo-Pacific.

The new images, taken by a Maxar Technologies satellite and first reported by the U.S. Naval Institute, document a “great wall” of missile testing facilities, some of which were previously used to test missiles on elaborate replicas of U.S. naval vessels.

Likely constructed in 2018, the newly discovered missile test site is located some 190 miles away from where mock-ups of a U.S. aircraft carrier and destroyer were discovered last year, before being destroyed by missile tests in February.

USNI described the test sites as “a string of large-scale target ranges” located in western China’s Takmalakan Desert, and suggested that their usage was the testing of new hypersonic missiles for use in an early military strike.

“The nature, location and strikes on these sites all suggest the targets are meant for testing ballistic missiles,” USNI reported. “These hypersonic anti-ship ballistic missiles (ASBMs) are an increasingly significant threat to warships.”

China’s military, the People’s Liberation Army (PLA), has been developing both its ASBM and nuclear missile capabilities across the triad of its land, sea, and air forces for the last several years. Notably, however, the complexity of the newly revealed test site may suggest that the PLA is developing advanced ASBM capable of making precision strikes by changing their trajectory in flight.

USNI reported that the new site was nearly identical to one destroyed in February, and made of a number of differing materials apparently intended to distinguish target ships from target piers, possibly highlighting the complexity with which China is gathering heat and radar information.

Traditional ballistic missiles are often considered ill-suited to attacking harbors, as they can easily stray off target and do not achieve the intended effect if they strike in the water. The PLA’s gathering of such targeting information could help them to construct much more accurate weapons systems, worthy of being used in an opening salvo against an enemy port.

“ASBMs, if they are able to discern a ship from a pier, could inflict a killer opening blow against an enemy navy,” USNI reported. “The fear is fleets could be decapitated before they can escape to open water or disperse.”

U.S. intelligence leaders have described the risk of China initiating a war over Taiwan before 2030 as “acute,” and the United States would likely be drawn into such a conflict. To that end, Air Force Secretary Frank Kendall said earlier in May that the PLA was explicitly researching and developing weapons capable of overcoming the United States’ military presence in the Indo-Pacific.

“They are studying how we fight… and designing systems that are intended to defeat us,” Kendall said.

“They’re not waiting to see what we do.”