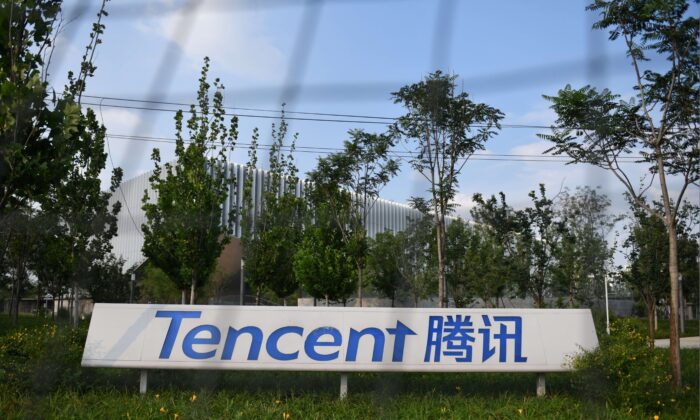 The headquarters of Chinese technology giant Tencent is seen in Beijing on Aug. 7, 2020. (Greg Baker/AFP via Getty Images)
Thinking About China

China’s tech sector is becoming uninvestable for a host of reasons, not least that the Beijing regime hates capitalism. It’s a communist country and its leader, Xi Jinping, appears to be a true believer and on track to be emperor for life.

CNBC’s “Mad Money” celebrity investor, Jim Cramer, put it in about these terms on Jan. 5, as news poured in of a major Chinese tech selloff. He called Xi a “totalitarian dictator.”

Cramer said it’s “impossible” to advocate investing in Chinese stocks at any price point given a looming cold war, human rights abuse, and disregard for shareholders.

On Jan. 4, new regulations prompted a selloff of China’s tech industry, followed the next day by fines slapped on the country’s biggest tech titans for anti-monopoly violations and failure to properly report some investment and acquisition deals.

China’s top market regulator hit Tencent, JD.com, Alibaba, and Bilibili. Some companies were down more than 6 percent on the news.

The Hang Seng TECH Index fell more than 4 percent. Since early 2020, the Hang Seng has lost about 50 percent of its value. Bilibili, a live-streaming platform, and Meituan, a food delivery app, both lost 11 percent.

The video streaming platform iQiyi lost 85 percent of its value since a high in 2021 in part due to investor concern that censorship is weighing on the supply of creativity and new shows that can keep viewers engaged.

Linus Yip, a strategist at First Shanghai Securities, told Bloomberg that “China is at the stage of implementing many tightened policies and rules that the government announced last year on the technology sector.” He said the “heightened volatility” may last through March.

In an interview published on Jan. 5, “bond king” and DoubleLine founder Jeffrey Gundlach said that “China is uninvestable, in my opinion, at this point.”

Over the past months, Beijing regulators cracked down hard on a broad range of Chinese tech giants—wiping out billions of dollars worth of shareholder value through the arbitrary introduction of surprise anti-monopoly legislation and data security rules.

The effects of Beijing’s tech crackdown go deeper than just stock valuations, however, to cut into the young and entrepreneurial workforce that drives the sector.

“The crackdown is killing the entrepreneurial drive that made China a tech power and destroying jobs that used to attract the country’s brightest,” according to Li Yuan in The New York Times.

An in-depth report by Li reveals that Chinese tech workers are increasingly unemployed as Xi orders “unbridled” regulatory hits and “meddling in big ways and small” into the industry, lopping off value and decreasing capital that can be deployed in the long-term investment that’s necessary to bring in new hires, much less keep those already on the rolls.

Officials nearly eliminated online education in China after they judged that its high expense decreased birth rates. Up to millions of people lost their jobs as a result. Many of those millions will not be having kids anytime soon.

“Beijing’s hyper-political approach shows that it’s more about the Communist Party taking control of the industry than about leveling the playing field,” according to Li.

“The crackdown is killing the innovation, creativity, and entrepreneurial spirit that made China a tech power in the past decade.”

She argues that the “pride and ambition” of a few years ago have been replaced by “fear and gloom” as Chinese tech companies lower growth targets.

The downward pressures of the tech crackdown are leading some CCP leaders to be critical, even when doing so can lead to imprisonment or disappearance.

Alibaba’s Jack Ma was detained for three months starting in November 2020 after being publicly critical of China’s financial regulators.

Despite the increasing risk, Hu Xijin, former editor of the nationalist paper Global Times, said recently that Beijing’s regulatory action should make companies healthier rather than leave them “dying on the operating table.”

Given the totalitarian threat that the CCP poses to the world, perhaps it’s good that China’s tech sector is struggling. But the cause of the failure should also be a warning to us all. Xi Jinping is not a friend to anyone, anywhere, who challenges his unfettered power.