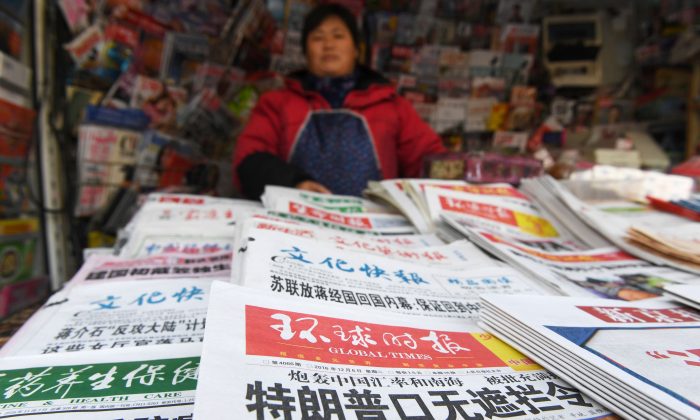 China Talks Tough and Rallies Citizens Amid US Trade War

Since the trade war between the United States and China officially commenced on July 6 after tariffs went into effect, Chinese state media has gone into overdrive to sway public opinion.

Specifically, state media has stoked nationalist sentiment to persuade citizens to support China “during this battle in the fate of nations” as China Media Group, the state radio and television broadcaster, describes it.

In a series of articles published by China Media Group since July 10, the broadcaster urged citizens to “forbear any temporary losses in their daily lives” in order to “overcome troubles together with the country,” alluding to any price increases or goods shortages that may arise after tariffs go into effect.

It said that, because “only with the country will there be a home,” Chinese citizens should bear the brunt of the trade war’s consequences.

Though Beijing has ordered state media to downplay the trade war and refrain from insulting U.S. President Donald Trump—as reported by Reuters and South China Morning Post—the official response has been aggressive in reprimanding the United States and denying that China has engaged in unfair trade practices.

On July 12, China’s commerce ministry issued a statement flatly denying that it had stolen U.S. technology, while charging that the United States had broken terms of mutual agreement “in order to serve the country’s political needs.”

Foreign ministry spokesperson Hua Chunying followed on July 13 with a logically flawed attempt at refuting that China has committed intellectual property theft, as the United States has claimed in a heavy-hitting report by the Office of the U.S. Trade Representative.

Hua said that in December 2017, a report by the World Intellectual Property Organization (WIPO), a United Nations agency, concluded that China’s State Intellectual Property Office had received 1.3 million patent applications, making it the world’s highest number. And in March 2018, WIPO numbers revealed that China had filed more international patent applications in 2017 than any other country, except the United States.

“This means that China has already become a superpower that independently creates intellectual property,” Hua said, according to state-run media Xinhua.

Netizens were not buying the argument, however. On Sina Weibo, a platform similar to Twitter, a user going by “Wei zhi yan” noted that when Chinese citizens suffer from the failed one-child policy or from exorbitant prices on medicines, the Chinese regime does not talk about “overcoming troubles together”—only when “foreign governments threaten to do something.”

One blog post that circulated widely before being deleted by internet censors read, “If you really want the people to sincerely overcome troubles together with the government, then immediately publicize the private assets of government officials and the job statuses of their relatives and children”—pointing at the rampant corruption and cronyism that has frustrated ordinary citizens.

Meanwhile, a research institute at the elite Tsinghua University, which has close ties to the state, released a report in July analyzing “trade strategies” in the U.S.–China relationship.

The Center for China in the World Economy hinted that China could strike back by sanctioning Apple.

Many Apple products, such as the iPhone, are manufactured in China and thus would not be subject to tariffs.

The report noted that in 2016, Chinese consumers bought more than 44 million iPhones, accounting for 21 percent of global sales.

If the United States “continues to punish [Chinese telecom firm] Huawei and other Chinese firms, China could sanction Apple to hit back at American corporations,” the report read.

Mary Lovely, an economics professor at Syracuse University, told The Wall Street Journal that the Chinese regime could delay Apple products when they’re going through customs, or provoke consumers to boycott Apple.

A former U.S. drug official also speculated that China could counterattack by refusing to work with U.S. forces in combating the illegal manufacture and sale of synthetic opioids—most of which originate in China. The United States is currently facing an opioid epidemic.

“In the end, they [Chinese drug enforcement agencies] will be pawns of whatever politics the government of China wants to enact,” said Jeffrey Higgins, a former Drug Enforcement Administration supervisory special agent, in an interview with Kaiser Health News.