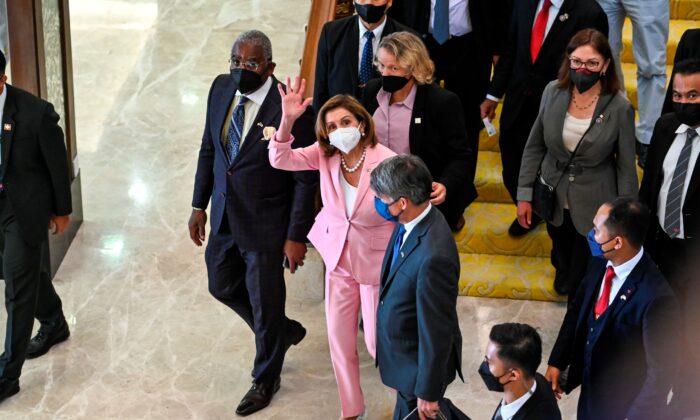 TAIPEI, Taiwan—With uncertainty over whether House Speaker Nancy Pelosi will visit Taiwan during her Asia trip, the Chinese communist regime has decided to intimidate the self-ruled island both militarily and economically.

Local media in Taiwan reported on Aug. 2 that Chinese customs officials announced a temporary ban on food imports from more than 100 Taiwanese companies overnight. Among those facing the ban are companies in the snack food and agricultural industries.

Wu Shou-mei, director-general of Taiwan’s Food and Drug Administration, told reporters on Tuesday that she couldn’t rule out “political reasons” as factors going into Beijing’s decision to impose the ban.

“We will not be intimidated by PRC’s [People’s Republic of China] weaponization of trade,” Taiwan’s ruling party lawmaker Wang Ting-yu wrote on Twitter in response to the Chinese ban.

“China’s response of stopping certain food and agricultural imports in wake of Speaker of the House Nancy Pelosi’s potential visit to Taiwan is clearly an underhand move attempting to punish Taiwan for actions of the U.S.,” Chen wrote on Twitter.

Pelosi arrived in Malaysia on the morning of Aug. 2, the second stop of her Asia trip following a visit to Singapore. While in Singapore, she met with President Halimah Yacob, Prime Minister Lee Hsien Loong, and Minister for Foreign Affairs Vivian Balakrishnan.

China has reacted angrily to the possibility that Pelosi will visit Taiwan, a self-governing island that the Chinese Communist Party (CCP) wants to claim as a part of its territory. China’s state-run media suggested that the Chinese military should “shoot” down Pelosi’s plane if she decided to travel to the island.

At the time of writing, it is unclear if Pelosi will visit Taiwan. However, local media have reported that she will arrive at around 10 p.m. local time on Tuesday, then visit the island’s parliament and meet with Taiwan’s President Tsai Ing-wen the next day, citing unnamed sources.

Ahead of Pelosi’s prospective visit on Aug. 1, U.S. military assets were reported in the vicinity of Taiwan. According to USNI News, at least two U.S. navy vessels, aircraft carrier USS Ronald Reagan and amphibious ship USS Tripoli, are operating on the edge of the South China Sea.

Lawmakers from both sides of the aisle have urged Pelosi to make the trip to Taiwan.

“The Chinese Communist Party threatened me prior to my visit to Taiwan last year,” Gonzales wrote on Twitter. “I strongly urge Speaker Pelosi to ignore the CCP and show America stands firm with our allies.

Ahead of Pelosi’s prospective visit to Taiwan, the CCP has decided to flex its muscle with a number of military maneuvers.

China will also hold military exercises in the South China Sea for five days beginning on Aug. 2, according to China’s state-run media. Additionally, a live-fire drill is to be held for four days ending on Aug. 4 in the Bohai Sea, which is located on China’s east coast.

An ADIZ is a publicly-declared area next to a state’s national airspace, in which approaching foreign aircraft must be ready to submit their identifiers and location. The area allows a state the time to judge the nature of the incoming aircraft and take defensive measures if needed.

Taiwan’s Ministry of National Defense, in a statement issued on Aug. 2, warned that it would appropriately dispatch forces in reaction to “enemy threats,” for it has a full grasp of military activities near the island, according to Reuters.

The ministry also said that it has the “determination, ability, and confidence” to ensure Taiwan’s national security, and has made various unspecified plans for an emergency.

On Tuesday, Taiwan’s government-run Central News Agency reported that the Taiwanese military has heightened its combat readiness since 8 a.m., citing an unnamed source. The heightened state will continue until noon on Aug. 4.