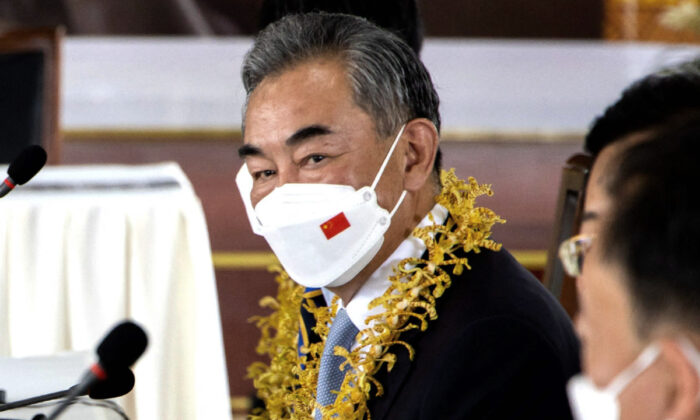 China Strikes Deal With Pacific Nation Samoa, Including a Toehold in Local Policing

China inked a deal with the Pacific island nation of Samoa on Saturday to deepen diplomatic ties, as China’s ruling communist party (CCP) and democratic nations in the region continued rival campaigns to woo undecided governments into their competing sphere of influence.

The China-Somoa agreement is the first deal signed by Chinese foreign minister Wang Yi on Day Three of a 10-day tour to eight Pacific countries. The move has brought concerns to Australia and other U.S.-allies in the Indo-Pacific who view the tour as part of the CCP’s ongoing push for greater influence in the Pacific region, laying the groundwork for an eventual military expansion.

The China-Samoa deal includes an Economic & Technical Cooperation Agreement for projects to be determined and mutually agreed to between the two countries, a handover certificate for an arts and culture centre and the Samoa-China friendship Park, and an exchange of letters for a fingerprinting laboratory for the police force, which complements a China-funded police training academy.

It described China as an important partner to Samoa that provides infrastructure for health, education and government, human resource developments, sports development, and technical assistance in agriculture.

“Samoa and the People’s Republic of China will continue to pursue greater collaboration that will deliver on joint interests and commitments,” the press release said.

Before signing the agreement in Samoa, the Chinese foreign minister had visited the Solomon Islands and Kiribati earlier in the week. Both countries were former diplomatic allies of the liberal-democratic self-ruled island of Taiwan before switching to China in 2019. The CCP sees Taiwan’s model of governance as a threat to its power in mainland China, and plans to reunify the island with the mainland under its socialist rule—by force if necessary.

Prior to Wang’s 10-day tour, a draft communique of China’s five-year action plan in the Pacific that Beijing is calling its “China-Pacific Island Countries Common Development Vision,” was circulated to the leaders of 10 Pacific nations—the Solomon Islands, Kiribati, Samoa, Fiji, Tonga, Vanuatu, Papua New Guinea, Timor Leste, Micronesia, and the Cook Islands—and leaked to the media.

Amid concerns about the CCP’s stepped-up military presence in the region, Australia’s new centre-left government has made the Pacific nations an early diplomatic priority.

Prime Minister Anthony Albanese, who was sworn in on Mat 23, said on Saturday that his government plans to develop a defence training school, increase support for maritime security, and re-engage the region on climate change as key strategies to combat the CCP’s offers like helping to invest in infrastructure projects.

“We will be proactive in the region, we want to engage,” he told reporters.

Albanese noted that his approach will be “one that respects the sovereignty of those nations, but one that also understands the role that we have historically played since the Second World War.”

“It’s unfortunate that in recent times, there’s been not a step-up so much in terms of the relations with our Pacific Island neighbours. My government intends to engage in a cooperative and respectful way.”

“In that spirit, I had a wonderful meeting with Foreign Minister (Penny Wong) to strengthen our Vuvale Partnership with Australia,” he said, using the Fijian word for friendship.

Wong also told reporters in Fiji’s capital of Suva that she had expressed concerns about the Solomon Islands security deal with Beijing, which could pave the way for Chinese troops, weapons, and naval ships to be stationed in the region.

“As do other Pacific islands, we think there are consequences. We think that it’s important that the security of the region be determined by the region. And historically, that has been the case. And we think that is a good thing.”

Fiji on Friday became the first Pacific Island country to join the U.S-led Indo-Pacific Economic Framework for Prosperity, which will fill the void left by the U.S. withdrawal from the Trans-Pacific Partnership trade agreement, in a blow to Beijing.

According to the draft communique, Wang has plans to host a meeting with the 10 Pacific nations, which aren’t already in security compacts with the United States and don’t recognise Taiwan, in Fiji next week.

My very rough EEZ map of Wang Yi’s Pacific Islands (PI) tour. The only fully independent PIs he’s skipping are ones that recognize Taiwan or have Compacts with US.

Even without them, pieces are in place to try to build a ‘first island chain’ to hem in/interdict Australia & NZ. pic.twitter.com/DQFbRlodDs